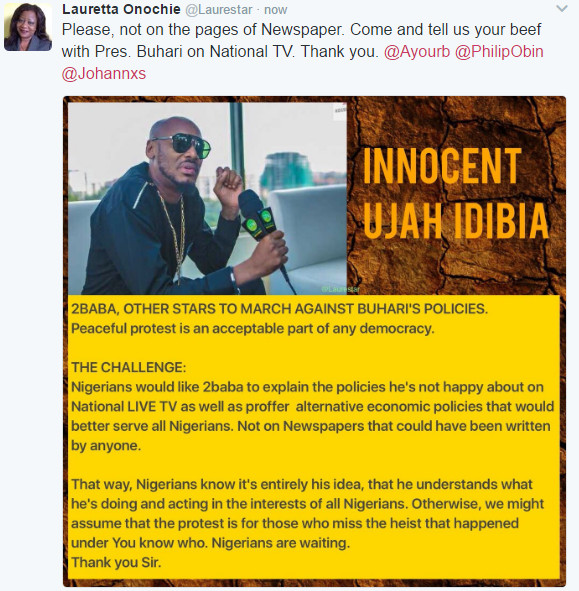 After superstar musician 2Baba announced that he will be leading a nationwide protest against the economic downturn that followed the President Muhammadu Buhari-led administration, various individuals have declared support for the move.

2Baba, during the announcement, had said that the protest is aimed at demanding accountability from officials at all levels of government in the country.

Others individuals, including Blackface, 2Baba’s former colleague in the defunct Plantashun Boiz singing group, have hinted that the protest may be politically motivated.

On Tuesday night, President Buhari’s Personal Assistant on Social Media, Lauretta Onochie tweeted an image with a challenge for 2Baba.

The challenge on the photo read: “Nigerians would like 2Baba to explain the policies that he’s not happy with on National LIVE TV, as well as proffer alternative economic policies that would better serve all Nigerians. Not on newspapers that could have been written by anyone.”

“That way, Nigerians will know it’s entirely his idea, that he understands what he’s doing, and acting in the interest of all Nigerians. Otherwise, we might assume that the protest is for those who miss the heist that happened under You know who. Nigerians are waiting. Thank you Sir,” the challenge ended.

However, 2Baba had released a video detailing the reasons for the planned protest, as poverty, hunger, unemployment, and deplorable healthcare and education are the order of the day in the country. WATCH it here.

Related Topics:2BabaLauretta Onochie
Up Next