Gov. Umahi calls for dismissal & prosecution of soldiers who brutalised physically challenged man | Hands over N500,000 to the victim 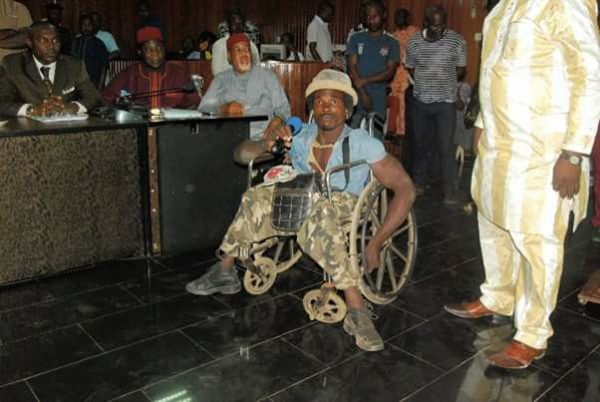 The Army authorities demoted the soldiers and sentenced them to 21 days imprisonment with hard labour.

Umahi, who received Oraku during the state’s Executive Council meeting in Abakaliki on Tuesday, noted that the sanctions meted to the soldiers were mild going by the fact that they “did not behave like human beings.”

The governor, according to a statement by his Chief Press Secretary, Emma Anya, said: “We believe that 21 day imprisonment is not enough. The soldiers did not behave like human beings and to be demoted is not enough. I suggest to the Chief of Army Staff, Lt.-Gen. Buratai, that those soldiers should be sacked from the army and be prosecuted immediately.”

Umahi, who however thanked Buratai for taking the actions against the soldiers, directed the Secretary to the State Government, Prof. Benard Odoh, to write a letter demanding the dismissal and prosecution of the soldiers.

He was also full of praises for his Anambra State counterpart, Willie Obiano, for his quick intervention in the case.

“I want to thank the Governor of Anambra State for his quick intervention in this matter. I was very happy when he reacted immediately and rehabilitated the young man. I also want to commend the Chief of Army Staff for the disciplinary action so far taken against those two soldiers. I thank the people of Anambra and Ebonyi who followed up on this matter.

But we are going to take a picture of him (Oraku) and send to the COAS to demand the sacking and prosecution of those soldiers who carried such unprofessional act.

I believe that the army has to be disciplined in their conduct. We must insist that discipline is maintained in our society.

If enough punishment is not meted on those two soldiers, they would still carry out the same act,” the governor was quoted as saying.

Umahi however asked his Senior Special Adviser and Welfare Matters, Rev. Father Abraham Nwali to interact with Oraku, on ways the state government could properly be of assistance to him.

He also ordered the release of N500,000 to the brutalised man for the continuation of his treatment and temporary upkeep.

No plan to raise N5trn from assets sales – FG