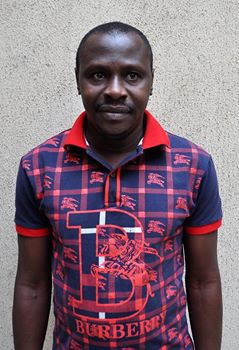 The Economic and Financial Crimes Commission (EFCC), on Wednesday, February 22, 2017 arraigned one Bala Tangalu before Justice A. B. Mohammed of the Federal Capital Territory High Court sitting in Jabi, Abuja on a 2-count charge of conspiracy and obtaining by false pretence to the tune of N2.5million.

Tangalu, a self-styled native doctor also known as Babalawo, was arrested following a petition by one Dozie Ugonna, who alleged that he was scammed of over N2.5million by the accused and his cohorts.

According to the petitioner, the money was meant for the purchase of materials to neutralize some harmful charms purportedly contained in a carton filled with United States dollars.

“Bala Tangalu, Ataye (still at large), Nnamdi (still at large) Peace (still at large) and Linda (still at large), in the year 2016 at Abuja within the jurisdiction of this Honourable Court with intent to defraud obtained the total sum of N2,540.000 (Two Million, Five Hundred and Forty Thousand Naira Only) from one Dozie Ugonna under the pretence that you are a native doctor a.k.a Babalawo and the monies were for purchase of materials to neutralize some harmful charms contained in a carton filled with United State Dollars, which pretence you knew to be false”.

The accused person pleaded not guilty to the charge.

Upon his plea, counsel to EFCC, Elizabeth Alabi, asked the court to fix a date for trial and remand the accused in prison custody pending trial.

She urged the court to consider the weight of the offence, which according to her carries a minimum of seven year jail term.

However, counsel to the accused, Yusuf Abdullahi, told the court he had a pending bail application before the court. He added that the accused had been granted administrative bail by the EFCC which he had not breached and urged the court to adopt same bail condition.

Justice Mohammed granted bail to the accused in the sum of N2million with two sureties in like sum. The sureties must be a civil servant or a community leader.

Related Topics:Bala TangaluEconimic and Financial Crimes Commission (EFCC)
Up Next