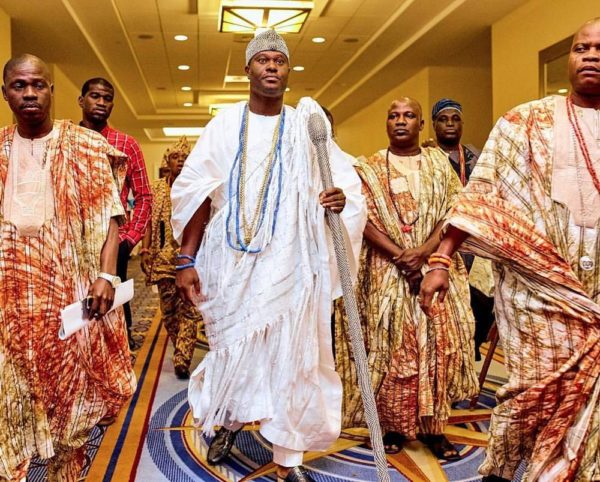 The Ooni of Ife His Imperial Majesty Ooni Adeyeye Enitan Ogunwusi Ojaja II, President of Ghana, Nana Akufo-Addo and Former Prime Minister of Barbados Arthur Owen are expected to join Her Majesty Queen Elizabeth II, other members of the Royal Family, Commonwealth Secretary General and other leaders of the Commonwealth as Special Guest Speakers during the this year’s Commonwealth Day Service and Commonwealth Africa Summit.

“Leveraging our Commonwealth Heritage for economic development and collective growth” will be at the top of conversations during the slated for March 13 -15 2017.

The monarch will, during the summit, give a keynote address as well as lay wreath at the Memorial Gate in remembrance of Africans who died in the two world wars.

A statement from the Ooni’s Media Office said that he “will also meet with the multitude of Yorubas in the UK. He will also be hosted by members of the British Parliament business leaders to discuss mutually benefits in cultural, economic and educational collaboration and partnerships.”

He will also visit the Old Royal Palace of Queen Elizabeth I at the Hatfield House where he will decorated as the promoter of African Culture in modern Europe with a performance of MOREMI stage drama by the Elite Royal College of Music, London.

The Ooni will dedicate part of his schedules to meet with Nigeria High Commission heads, Nigerian-British Mayors (past and present), Local Councillors, business professionals, the youths who are global players in their fields of endeavours.

The Commonwealth Africa Summit 2017 activities will begin with a wreath laying service in honour of those who were lost to the 2 world wars and will be followed by a Service at the Westminster Abbey in the Presence of Her Majesty Queen Elizabeth II and other Royals.

Her Majesty will host the Ooni, other Commonwealth leaders and eminent individuals in attendance at a dinner reception at Marlborough House as part of the activities to celebrate the Commonwealth Week.

The Summit business activities will begin on Tuesday 14th March with an Opening Plenary and close with a Dinner on Wednesday 15th March in Westminster.

At the 2017 Commonwealth African Summit, prominent leaders will deliberate on the theme ‘from Shared Prosperity to Collective Growth’ – one that promote prosperity and secures Africa’s future.

Issues such as energy and power, Africapitalism, trade and investment, sustainable livelihood, children’s rights, counter insurgency and terrorism will be discussed and lasting solutions proposed.

*Meeting with Nigerian Mayors and Councillors (past and present)

*Meeting with Nigerian professionals at the Nigeria High Commission

*Forum with Nigerian Students and Youths in the UK