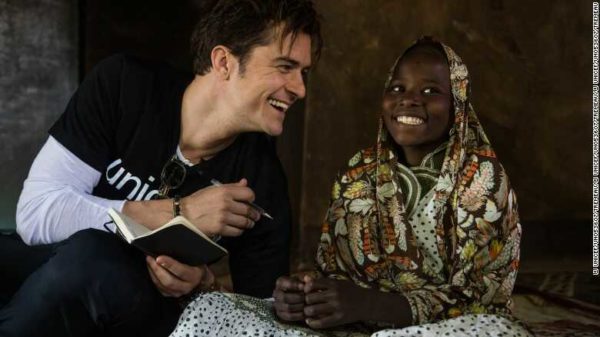 Hollywood actor Orlando Bloom was recently in Diffa, in the southeastern Niger Republic  to visit and see the impact of Boko Haram on the people living there.

Following his visit, he penned an insightful and heartwrenching piece for CNN.

Read his article below.

In early February, I traveled to Diffa in southeastern Niger to better understand the impact of Boko Haram on the people living there. The Diffa region alone currently hosts over 240,000 internally displaced persons, refugees and returnees, including 160,000 children.

I’ve been a UNICEF Goodwill Ambassador for almost 10 years, and this isn’t the first time I have seen and heard about terrible suffering, but the devastating stories I heard from children in Niger will haunt me for a long time to come.

Boko Haram violence has affected millions of children and families across West Africa’s Lake Chad Basin — Niger, Nigeria, Chad and Cameroon. Children as young as 12 have been abducted and killed; many have been forced from their homes and schools, and left without food or clean water. This bloody conflict has resulted in one of the most severe humanitarian disasters and displacement crises in Africa.

Every child I met had been impacted in some way by the conflict and violence shattering this region for more than two years. What these children need most is an end to the violence but until that happens, they need all the support they can get from organizations like UNICEF, schools and support centers, to help rebuild their lives.

At just 12 years old, Eta had witnessed atrocities that no child, or anyone for that matter, should ever have to bear.

I met Eta at her family home in Bosso, Niger, on the border with Nigeria; a bright and gentle girl with all the hopes and dreams of any 12-year-old, but deeply affected by trauma and fear. Eta told me how she was awakened one morning, two years ago, by the sound of gunshots and threats as Boko Haram arrived in her village. Shaking as she spoke, she told me that she really thought she was going to die.

When the fighters finally left, Eta fled on foot with her family, leaving their home and belongings and not knowing if they would ever return. The family took refuge in a temporary camp in Diffa, but Eta wasn’t able to sleep properly for months because of nightmares where she would see Boko Haram coming after her. Having recently returned to her home village with her father and siblings, Eta is now back at school in 7th grade and dreams of becoming a doctor when she grows up.

Eta is one of thousands of children whose education has been stalled because of the ongoing instability in the region. When I visited schools during my trip, I could see they were extremely overcrowded and struggling to cope with the huge number of displaced children. In one temporary learning space I visited at the N’gagam site for displaced families in Diffa, there were 500 students and only 12 classrooms and 12 teachers.

Though overcrowded, temporary schools like these, many set up by UNICEF and its partners, offer more than just an education for children whose lives have been devastated by this fighting.

Classrooms are where children have the chance to feel safe and protected, and make new friends with other children who have been through similar experiences. The teachers truly impressed me; they are trained to identify children with trauma and refer them to psychosocial support centers where they can access help to deal with the horrors they have faced.

I met 14-year-old Amada at one such center, in the Garin Wazam site for displaced families. Like many children, he fled to Niger from neighboring Nigeria, and has experienced violence and witnessed killing and maiming of friends or family members.

Amada told me he doesn’t sleep at night. I could tell that it was difficult for him to relive those traumatic experiences. However, since taking part in the activities at the support center, Amada is better able to express his feelings and talk about his fears.

He’s made new friends, and I had the opportunity to join them in a game of basketball. It brought me so much joy to see Amada with a smile on his face and just being a young teen. Giving these children back a sense of normality is crucial not only for their own future, but the future of their communities and their countries.

As long as violence continues to plague the Lake Chad Basin, the future of its children will continue to hang in the balance. But if I have learned anything from the stories of Eta, Amada and thousands of children like them, it’s that children are incredibly resilient. Their ability, when given a chance, to realize their dreams fills me with hope.