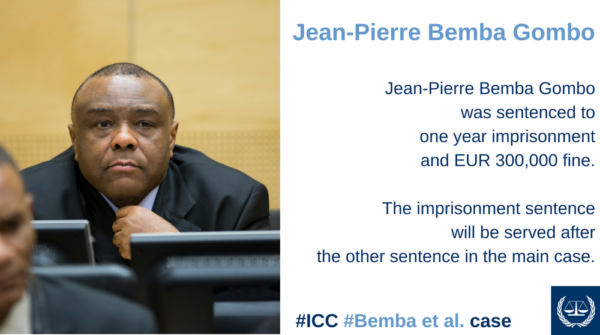 A year has been added to Jean-Pierre Bemba‘s 18-year jail term by Judges at the International Criminal Court (ICC) following the former Congolese vice president’s conviction for attempting to bribe witnesses during the war crimes trial.

He was found guilty last year of bribery, making the verdict and sentence the first of their kind in the history of the ICC.

The chamber imposes on you an additional 12 months, one-year, imprisonment,” presiding judge Bertram Schmitt told Bemba, adding a substantial fine was necessary to discourage this kind of behaviour”.

The decision to bring bribery charges against Bemba and four members of his legal team was seen by criminal law experts as a sign that prosecutors had decided to get tough on a practice that threatened their ability to prosecute the gravest crimes.

His former lead lawyer, Aime Kilolo, was ordered to pay a fine of 30,000-euro and given a two-and-a-half-year suspended sentence. Three others were given either suspended jail terms or sentenced to time served.

Bemba is appealing against his conviction last year on charges of having committed war crimes by allowing his forces to go on a murderous rampage through the neighbouring Central African Republic in 2002 and 2003.

Judges gave prosecutors and the defence 30 days to lodge an appeal.