Joseph Udeh, owner of Jouf Nigeria Limited, located at No. 10 Faith Street, off Comfort Oboh Street, Kirikiri Road, Apapa, Lagos, has been apprehended by the Standards Organisation of Nigeria (SON) for dealing in the repackaging and sales of expired products.

SON’s Director of Monitoring & Compliance, Engr. Bede Obayi, who took journalists round a twin four-storey building located in Kirikiri Town, Lagos on Monday said they got to know of Udeh’s dealings following a tip-off by members of the public.

According to Vanguard, all sorts of expired cosmetics and household consumables were found in the flats.

“We acted on the intelligence we received from well-meaning Nigerians. You can see the volume of expired products here and imagine the implication for our society in terms of health issues.

When somebody buys expired cream, what does it show? You are applying cream that the active ingredient has gone and that may cause reactions on the skin.

Obayi, who said most of the products are popular brands imported into the country, added:

Perhaps they went overseas to buy these products that are close to their expiry dates and shipped them down here, because they have ready markets where people can buy.

This four-storey building of eight flats with the toilets, bathrooms and all available spaces (is) filled with expired products. That tells you the enormity of the crime this person is committing.

Look at this wrapper for disinfectant. What they do is to pick the expired ones and use this wrapper with new expiry dates to wrap it. When you have the old products inside this wrap that carries 2018 as expiry date, you will not know you are buying cloned products. The products have lost their active ingredients and efficacy. 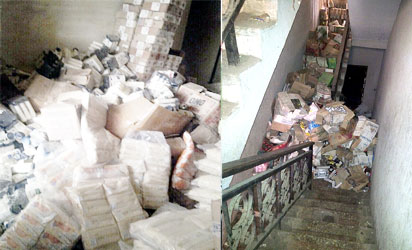 According to PUNCH, Udeh claimed that he was waiting for officials of the National Agency for Food, Drug Administration and Control (NAFDAC), to come and destroy the expired products.

“We invite NAFDAC every year to come and destroy the expired goods but they do not come as often as we need them to and sometimes when they come, they would insist on destroying only a limited number, two truckloads of goods, maybe,” he said.

Responding to Udeh’s claim the Public Relations Officer of NAFDAC, Christy Obiazikwor, said the man is using the agency as an excuse to cover up for his crime.

“What he is saying is not even logical. If he invited NAFDAC to destroy the products, why is he then changing label on them?” she told PUNCH.

Reacting to Udeh’s claim, Obayi said “What we have seen here is a dubious warehouse or hideout where people are churning out expired products for the markets.”

Obayi, who said most of the products have entered the market, added that as investigation continues, SON will recall those already sold out.

“We have our offices throughout the nation and are going to escalate the recall process immediately, where we will get all the details of their transaction, so that anywhere these products are, we will pick them with the cost to the importer.

SON cannot accept this and those who are out to kill Nigerians. We will not allow them to be selling things like this, killing people in the name of merchandising.

We don’t want to continue to see people with illnesses caused by people who are out to kill by changing expiry dates,” he said.