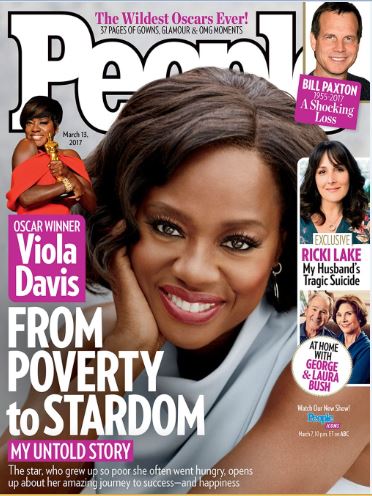 In the magazine, the actress opens up and talks about the struggles of growing up in poverty and how her talent propelled her to success later in life.

On Growing Up in Poverty

I was the kind of poor where I knew right away I had less than everyone around me. We had nothing, I cannot believe my life, I just can’t, I’m so blessed. I would jump in trash bins with maggots looking for food, and I would steal from the corner store because I was hungry, I never had any kids come to my house because my house was a condemned building, it was boarded up, it was infested with rats. I was one of those kids who were poor and knew it.

It became a motivation as opposed to something else — the thing about poverty is that it starts affecting your mind and your spirit because people don’t see you, I chose from a very young age that I didn’t want that for my life. And it very much has helped me appreciate and value the things that are in my life now because I never had it. A yard, a house, great plumbing, a full refrigerator, things that people take for granted, I don’t.

On deciding to become an actress

I first envisioned myself as an actor after I watched Cicely Tyson in The Autobiography of Miss Jane Pittman when I was a child.

It wasn’t until then that I had a visual manifestation of the target I wanted to hit, It also gave me hope for the future and a different life for myself, she helped me have a very specific drive of how I was going to crawl, walk, run from that environment.