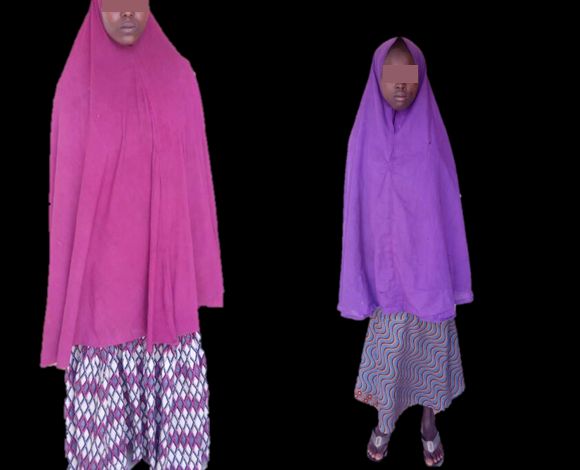 The Borno  Command of the Nigeria Security and Civil Defence Corps ( NSCDC), said it has arrested a 15-year -old girl, Fatima K. believed to be a former wife of a Boko Haram factional leader, Mamman Nur.

The Commandant of NSCDC in Borno, Ibrahim Abdu, disclosed this while briefing newsmen in Maiduguri on Tuesday.

He said that the girl was arrested by the intelligence unit of the corps in company of another teenage girl, Amina S. in Maiduguri.

Abdu said they were suspected to have been smuggled out of Sambisa forest to Maiduguri to wreak havoc on innocent civilians.

The commandant said that medical test proved that she is four months pregnant and infected with HIV.

The NSCDC commandant said that the girls were found loitering at the popular Kano motor park in Maiduguri metropolis.

He said that upon extensive interrogation, they confessed to have been sneaked into Maiduguri for possible suicide attacks.

The commandant explained that after proper investigation, the command would hand them over to the appropriate authority for the next line of action.

Speaking with newsmen, the girls denied being on any suicide mission, saying they escaped from the Boko Haram camp in Sambisa and surrendered to the troops in Bita village, Gwoza local government area of Borno.

He added that Amina had equally admitted to being married to two different Boko Haram members in Sambisa forest.

Speaking to The Nation in an interview, Fatiman said she was introduced to the group by her brother, Ibrahim Fadagana, in 2013.

“My brother took us from Maiduguri to Sambisa forest where he introduced us to Abubakar Shekau. Things did not go well at the camp as most of the people did not like Shekau’s brutal treatment of abductees and sect members in the camp. There was a lot of death in the camp. Children died of dehydration and malnutrition.

So, there was a lot of disagreement between Shekau and Mamman Nur and Nur refused to accept Shekau’s policies. So they broke up. My brother (Fadagana) was a close friend to Mamman Nur, so he stood as my father and got me married to him (Mamman Nur). I was married to him in 2013. I was 12 years old at the period.

On the wedding night, Mamman Nur forced himself into me and destroyed my vagina {which led to me having Vesico Vaginal Fistulae (VVF)}. I was sick for a while, but I became better.

In that same year, 2013, he left me to participate in an arms and military training program in Libya. I couldn’t wait for him, so I immediately got married to Habib, a member from Bauchi State.

Habib later ran away because he was marked for execution. He was suspected to be an informant for the Nigerian government. So he deserted me and absconded from the camp.

I later got married again to one Ali Bama. He was not a Commanding Officer. He was just an ordinary member like the others.

He has protected me and provided food for me at our Sagil Huda camp in Sambisa Forest. I am presently carrying his (baby).

The men always sleep in the afternoon and do marathon sex with all the girls for the whole night. Only those that are married are safe.

At a point I became sick, so a French doctor came to check on me. He gave me some drugs and said I must be taking it from time to time.

I learnt that I was infected with HIV. I don’t know if I got it from the marathon sex or from the three husbands I married. My current husband, Bama, was also taking his own drugs just like me before I left our base. We are both infected,” she said.

“We ran away from Sagil Huda because the army came and stormed our camp and killed many of our members. Right now, my mission is to go and meet my brother Fadagana, he is at Kangarwa with Mamman Nur. I have Mamman Nur’s phone number, I have been communicating with him. My plan is to go and meet him,” she said.

Amina also corroborated Fatima’s story saying she hailed from Gulak town in Adamawa but was abducted and taken to Sambisa two years ago.