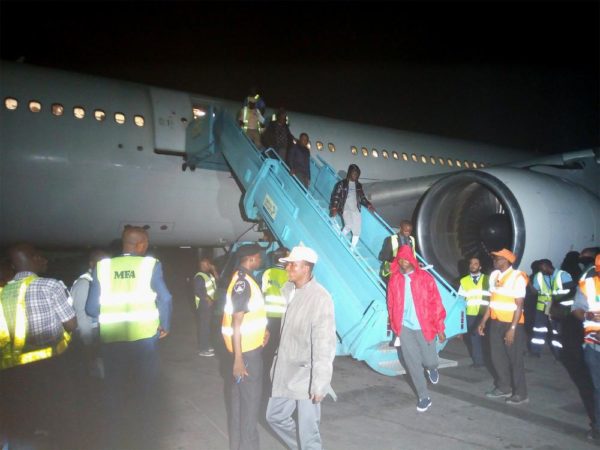 File Photo: Some Nigerians deported from Italy, Belgium and Germany on their arrival at the Murtala Muhammed International Airport, Ikeja, in Lagos on Thursday (23/2/17).
01587/23/2/2017/Timothy Adeogodiran/BJO/NAN

Their deportation is coming barely 48 hours after another set of 40 Nigerians were deported by the Italian Government, for similar reasons.

The fresh batch of deportees arrived at the Murtala Muhammed International Airport (MMIA), Lagos at about 7.36am.

The deportees, comprising of 48 males and 2 females, were brought back in a chartered Privileged Time aircraft, with registration number EC-L20.

“This morning, we received 50 Nigerians who were brought back from Europe.

We had three males from Switzerland; from Germany, we had seven males; from Sweden, we had four males, from Luxembourg, we had six males; from Austria, we had 18, comprising of 17 males and one female.

From Belgium, we had only one female; from Spain, we had five males and finally from Hungary, we had six males, which makes it a total of 50,’’ Alabi said.

Alabi said all the deportees were alleged to have committed immigration-related offences in their host countries.

Alabi said the deportees were received by officers of the Nigerian Immigration Service (NIS), the National Agency for the Prohibition of Trafficking in Persons (NAPTIP) and the Police.

Also on ground to receive them were officials the Federal Airports Authority of Nigeria (FAAN) and the National Drug Law Enforcement Agency (NDLEA).

The deportees were profiled by immigration authorities and were allowed to depart to their various destinations.