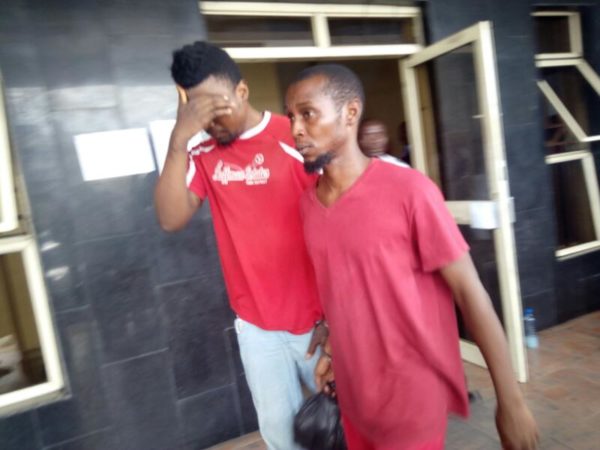 Sodienye Mbatumukeke and Excel Naabe, two of the suspected murderers of Chukwuma Eleje, a delivery agent of eCommerce platform Jumia have been remanded in custody following an order by a Chief Magistrate’s Court in Port Harcourt, Rivers State.

The duo and one Joy Eluwa were arrested after Eleje was declared missing and his body discovered from a septic tank on Ada-Ede Street, Shell Location Mgbuoba, Port Harcourt.

Eleje had gone to deliver some phones at the residence of the suspects.

According to PUNCH, Sodienye and Excel were arraigned by police prosecutor, Inspector Jonas Rufus before Chief Magistrate Amadi Amadi-Nna on Monday. Joy was not part of the arraignment.

The suspects, who were without a counsel, were arraigned on three counts of robbery, conspiracy, and murder

That you, Sodienye Mbatumukeke, on March 25, 2017, on Ada-Ede Street, Shell Location Mgbuoba, Port Harcourt, in the Port Harcourt Magisterial District, did use a pestle to hit the head of one Eleje Chukwuma, and robbed him of one Infinix Note 3 handset valued at N67,000, one IM-10 desktop GSM phone dual SIM, valued at N9,500, and one Gionee M6 phone, valued at N105,000; all valued at N181,000.00, property of Jumia Online Shopping Company, thereby committing an offence punishable under Section 1 (2) (a) of the Robbery and Firearms (Special Provision) Act Laws of the Federation of Nigeria, 2004.

That you, Sodienye Mbatumukeke and Excel Divine Naabe, on the same date and place, in the aforementioned magisterial district, did conspire among yourselves to commit felony, to wit: murder, thereby committing an offence punishable under Section 324 of the Criminal Code Cap 37 Vol. II Laws of Rivers State of Nigeria 1999.

That you, Sodienye Mbatumukeke and Excel Divine Naabe, on the same date and place in the aforesaid magisterial district, did murder one Eleje Chukwuma, by hitting him on the head with a pestle and subsequently suffocated him by covering his head with a polythene bag, before tying him with a wire, which caused his death, thereby committing an offence punishable under Section 319(1) of the Criminal Code Cap 37 Vol. II Laws of Rivers State of Nigeria 1999.

After the charges were read, Chief Magistrate Amadi-Nna said that the court lacked the jurisdiction to judge the matter due to the gravity of the allegations, adding that he will send the case to the Director of Public Prosecutions for advice.

Amadi-Nna added that the accused could seek bail at a State High Court.