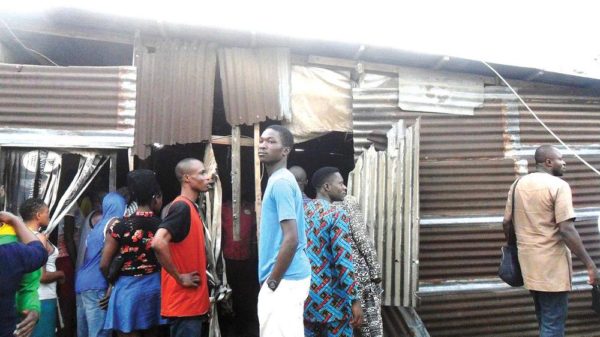 Ndabo Enobong Tommy, a community leader in Nyagasang, Calabar, and an eyewitness in the incident that led to the deaths of more than 30 people when high-tension cable fell on a house where some football fans were watching a Europa semifinal match on Thursday.

The game was between between Manchester United of England and Anderlecht of Belgium.

“It happened when NEPA took light. People had to run out for their dear lives and I was the last person to go out. As at that time, there was no casualty, but the viewers demanded that the owner should put on the generator, so that they can continue watching their match.

People rushed in to take their normal positions and watch the match, but 15 minutes later, light came again and the high tension cable fell on the ground.

So, there was a big spark, which blew the roof and people started running out in a stampede through the only exit and people were just falling over themselves by the door and dying.

Some of the people were taken away by their loved ones to hospitals of their own choice and that is why we cannot give account. But if we talk of the ones in the teaching hospital, they are up to 10 people, but the ones people took to different hospitals we don’t know. They are people living around here,” The Guardian quoted Ndabo as saying.

Another eyewitness said as they were watching the game, there was a loud explosion from the transformer which cut power, and the cable on the roof of the viewing centre.

Those in the viewing centre were reportedly aware that there was a high-tension cable on the roof, but remained in the centre, since power had gone out.

They told the owner of the centre to put on the power generator which he did.

They were watching the game when power was restored and the centre went up in flames.

“We watched the game for about 38 minutes and most of us that were there, especially those ones that were sitting around me, were dead. I cheated death because I believe God has a reason for keeping me, because I must fulfill my destiny,” A Manchester United fan and also an eyewitness, Oka Timothy, said.

Initial reports say more than 30 people died in the accident, but police report says 7 people died and several others were injured.

President Muhammadu Buhari, Governor Ben Ayade, FIFA, and Manchester United on Friday mourned their deaths and the Nigerian Electricity Management Services Agency (NEMSA) says it has commenced full investigation to unravel the remote and immediate causes of the accident.