The Federation of International Football Association (FIFA) has expressed sadness over the death of some football fans in Calabar, who were electrocuted while watching Europa League quarterfinal game on Thursday.

More than 30 persons were reported dead as an electric cable from a high tension installation fell on the viewing centre where they were watching the match between Manchester United and Anderlecht.

The incident happened at around 9.30PM at Nyagasang area of Atimbo in Calabar Municipal Local Government Area of the state.

“FIFA is deeply saddened by the deaths of several football fans in Calabar and offer our deepest condolences to family and friends of the victims,” the world football body wrote on its Twitter handle on Friday.

Manchester United has also sent condolences to the families of the football fans.

“Our thoughts go out to the Manchester United fans, their friends and families affected by the tragedy yesterday in Calabar, Nigeria,’’ the club wrote on its Twitter handle on Friday. 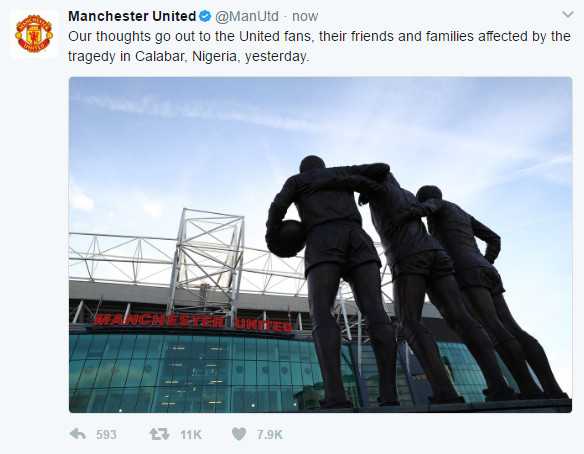 United won the game 2-1 and qualified for the semifinals of the competition.

United will face Spanish side, Celta Vigo, in the semi-finals, while Ajax of Netherlands will meet Lyon of France.

It is common practice in Nigeria for fans to watch football matches at viewing centres for a fee, as most either cannot afford the high cable television subscription fees or prefer to watch with other fans.

President Muhammadu Buhari had also expressed sadness over the death of the football fans.

He commended the government for the prompt action in setting up a commission of inquiry into the incident, and for its offer of assistance to the victims and their families.

“I offer my deepest condolences to the family and friends of the mostly young victims whose sudden demise is a big blow not only to their families, but also to the football-loving nation, ’’ he said.

According to a statement by his Senior Special Assistant on Media and Publicity, Malam Garba Shehu, Buhari prayed that God grants the souls of the departed eternal rest and comfort all who mourned their irreparable loss.

The Nigerian Electricity Management Services Agency (NEMSA) says it has commenced full investigation to unravel the remote and immediate causes of the tragedy.

The Chief Electrical Inspector of the Federation, Peter Ewesor, announced this in Abuja on Friday.

Ewesor, who is also the Managing Director of the agency, described the incident as “unfortunate’’.

“Our field engineers are already there. I am equally on the way to the place now for us to go and find out actually what happened, how it happened and how we can prevent future occurrence. Presently, we are mourning with the family of the diseased; however, we will be able to make concrete statement to the nation after the investigation. When things like this happen, as painful as they are, we should be on guard to prevent further occurrences,’’ he said.

He said the investigation would assist the agency to find out what led to the mishap.