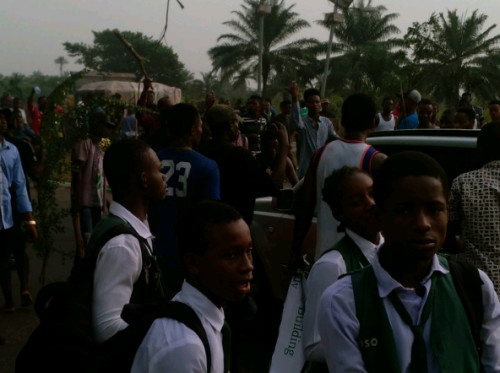 Students of the Federal University of Technology, Owerri (FUTO) have declared readiness to vigorously challenge the decision of university authorities to expel 15 student activists who participated in February’s protest of the hike in tuition fees and deadline for payment. In addition, they also protested against bank charges on the campus.

According to the students, the university management had imposed a N10,000 fine despite seeing a massive crowd of students in front of the campus branch of Diamond Bank who were waiting to pay their fees.

This resulted in a protest which was broken up by officials of the Department of State Security, and they arrested and detained successfully some of the past SUG executive members, led by Comrade Ogbonna Collins popularly known as “FUTO-Rochas”.

Collins is the immediate past Public Relations Officer of the SUG. The incumbent SUG President, Akano Nnaemeka, had gone on a popular radio station in Owerri to dissociate himself from the protest.

Three days after the arrest of Ogbonna, the students launched a violent protest during which parts of the university Information Communication Technology Building were torched. The students alleged that since the appointment of Professor Francis Eze as the Vice Chancellor, all the fees in the university have gone up and students are being compelled to pay bank charges of N2,500 to Diamond Bank, the only bank on campus.

Some students told SaharaReporters that most of them have no university identity cards, despite having paid for such. The same goes to the lack of the university to provide them WiFi despite promising to do so.

FUTO’s Senate reportedly sat on 30 March and resolved to expel Comrades Collins, Mmegwa Kenneth, Ugwu Okechukwu, Madu Nnamdi, Onuoha Elvis and Odunze Ebuka among others, a decision the students have vowed to challenge with all legal means.