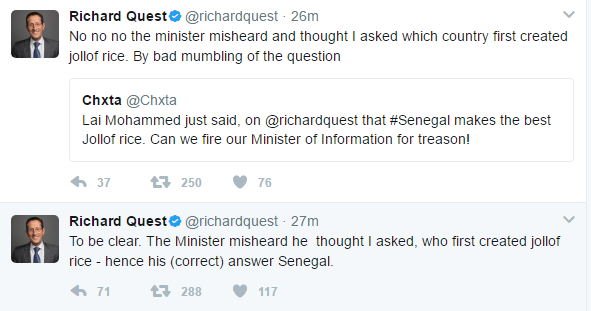 Richard Quest of CNN‘s Quest Means Business has cleared the air on one of the top trending topics on social media.

During Friday night’s show, Nigeria’s Minister of Information, Lai Mohammed was asked “Which country makes the best Jollof rice,” and he responded with “I’ll have to say Senegal”.

Quest has however said that the minister misheard. “He thought I asked, who first created jollof rice – hence his (correct) answer Senegal,” Quest wrote on Twitter.

However, prior to his Tweet, Twitter NG had dragged and is still dragging the minister following his statement.

You are Public Property, Disclose your Health Status – Wole Soyinka to Buhari | WATCH