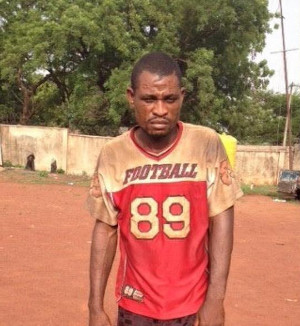 One Daniel Ekemezie, a Mathematics teacher with Ukpata Community Secondary School in Uzouwani Local Government Area of Enugu State has been arrested by the Enugu Police Command for allegedly killing his uncle, Patrick Odoh, 83, over land dispute.

The command’s spokesman, Ebere Amaraizu, disclosed in a statement on Wednesday, that the suspect blamed the devil for his action.

Amaraizu said that the killing happened at Ukpata community in Uzo-Uwani Local Government Area of the state.

He said that police acting on intelligence promptly nabbed the suspect, a father of two, who confessed what transpired between him and his late uncle.

The suspect also said that he and his uncle had been locked in a protracted land dispute.

The suspect said her left house in Ukpata community at about 8PM on March 4, 2017 and headed to his uncle’s place.

“On getting to the place, I woke my uncle up and tied his mouth with cloth to avoid him shouting, while I whisked him quietly that evening to Iyimkpafu/Ofiakputu forest in our community. I tied him on the tree with rope and left him till March 8, 2017. When I discovered after five days that he was dead, I buried him in a shallow grave,’’ Amaraizu quoted the suspect as confessing to the police investigation team.

Amaraizu said that the suspect has been helping the police in their investigation. According to him, the suspect led  police operatives to the grave, where the decomposed corpse of late Odoh was recovered on  4 April  2017.

“The suspect is regretting his evil act which he blamed on the devil,’’ he said.

U.S. is Drowning now that President Trump is in Office – ISIS

Are You Ready to Laugh & Have a Good time this Easter? Be at Funnybone Untamed Comedy Jam with Phyno, Seyi Law, Gordons, Yaw & More | Friday, April 14th