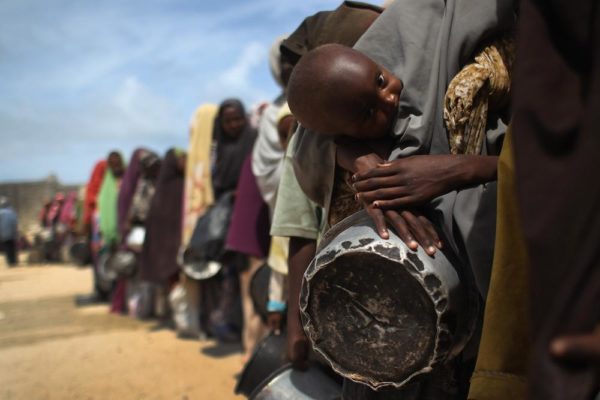 Nearly five million people in Northeast Nigeria are desperately hungry and risk starving to death this year if they do not receive food aid, according to figures from the United Nations. This wrought caused by Boko Haram could drive even more Nigerians to flee the country to Europe via the Mediterranean Sea, unless the international community ramps up support and funds, Ayoade Alakija, Nigeria’s humanitarian coordinator said.

She added that for 8 years, the Jihadist group has made many attempts to carve out an Islamic state in Northeast Nigeria, killing at least 20,000 people and forcing about 2 million others to flee their homes in the process.

“With so many people facing famine, this is the wrong time to criticise us and simply say ‘You are the giant of Africa’. The world could see a mass exodus from a country of 180 million people if support is not given, and fast …if people facing famine fall into famine,” Alakija told the Thomson Reuters Foundation in an interview in the Senegalese capital of Dakar.

While the European Union has been strained by the influx of 1.6 million refugees and migrants between 2014 and 2016, a greater number of people in northeast Nigeria, some 1.8 million, are unwilling to go back to their homes. A situation Nigeria is struggling to respond as it deals with its first recession in 25 years.

The CEO of AOA Global, an international non-profit group with high-level global contacts on humanitarian intervention, said the Borno State Government had taken measures to improve protection efforts such as having more female officials in camps for the displaced and tackle corruption.

According to Today.ng, the president’s spokesman in December said aid agencies, including the United Nations, were exaggerating levels of hunger to get more funding from donors, while Borno’s state governor in January said many of the groups were profiting from the crisis.

This arose from a lack of understanding and the fact that Nigeria has never faced this kind of situation before. There is no denial of the scale of the crisis within the country, but rather incredulity around what has been going on. For the first six years of the insurgency, the previous government did not adequately acknowledge or respond to it. It was not until President Muhammadu Buhari came to power in 2015 that Nigeria, and the world, woke up and smelt the coffee,” Alakija said.

With Boko Haram’s insurgency in its eighth year and showing little sign of ending, many aid agencies are thinking beyond just emergency aid and considering how best to foster and improve long-term development and resilience-building efforts.

“The government is tackling the crisis on several fronts, not just handing out food parcels. We are focusing on rebuilding entire communities so that people can go back to their homes, jobs, and resume their lives as normal,” said Alakija.