WATCH: We were Forced to Make Apology Video to Otedola and Others - Jyoti and Kiran Matharoo 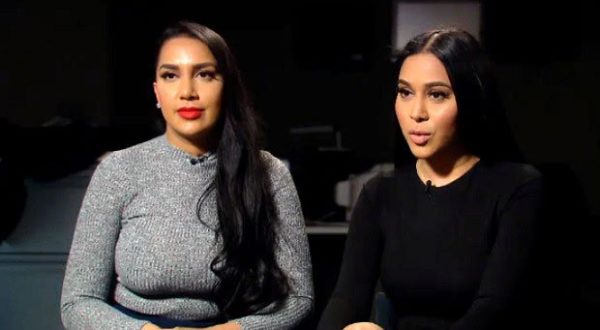 Canadian sisters Jyoti and Kiran Matharoo who were arrested and charged for blackmail, extortion and cyberbullying billionaire Femi Otedola have returned to their country. They were also charged with threatening to kidnap.

Reports said they blackmailed Otedola with photos and videos of him cheating on his wife.

Following their arrest and arraignment, the sisters who were alleged to be the owners of NaijaGistLive, a gossip website which has now been taken down.

The Matharoos, had in a video posted on YouTube apologised to the billionaire and everyone they had blackmailed. They also admitted to  creating an online “platform” known where people could anonymously send in scandalous stories about others.

In an exclusive interview with CTV News Toronto, The sisters said they had nothing to do with the website adding that they agreed to make the video in return for their international passport.

They alleged that Nigerian authorities, in their bid to cover-up a “national embarrassment” involving a person with “power and money,” they (Jyoti and Kiran) were used as scapegoats.

Narrating what happened on the night of their arrest, they said that on December 14, while settling in their hotel in Nigeria where they had come for holiday, they heard a knock on the door.

Kiran added that police officers pushed her out of the way when she opened the door. She said they took their phones and questioned them on their link to the gossip blog.

“When I first told the police officer that we had been slandered on the site ourselves, he said, ‘You have?’” Kiran said. “He was confused by it.”

She said the anonymous author and subsequent commenters called them “prostitutes,” “escorts” and “gold diggers,” and they “were always trying to guess who we know, who we don’t know, what we’re doing and where we are,” Kiran said.

Jyoti said she picked up her phone when the officers were searching their stuff, and tried to call the Canadian Embassy but was caught by an officer who snatched the device from her hands.

She said they were forced into a vehicle by the officers who were not wearing uniform.

“At this point I was yelling and saying, ‘Show me an arrest warrant, show me something with my name on it,’ but they didn’t have any identification. It was scary. It’s hard to relive it. We just thought we were going to be questioned and we could say that we wanted our lawyer and that they’d just let us go. That never happened.” Jyoti said.

Eight hours passed before the girls were freed without much explanation.

They said they were placed under police protection at a new hotel near the airport, adding that Otedola arranged to have then taken to his home where they recorded the apology video.

They said they were offered a deal to admit to running the blog and damaging Otedola’s reputation and be let go. They said they signed the undertaking out of fear, adding that the deal also said they will never return to Nigeria.

Kiran said, “It was pretty much being forced, otherwise you’re going to be thrown into a maximum security prison for God knows how.”

Jyoti said Otedola claimed that him “and his family were in fear of being kidnapped, death, bodily harm, injury to his character and reputation.”

The sisters said that Otedola claimed that after the slanderous post about him was published, he got a message “from the website” by someone who threatened to kidnap him.

Jyoti and Kiran said they’ve known Otedola “personally” and have “always been cordial,” but the attack against them came as a surprise.

“It became very publicized in Nigeria that we were the owners of this slanderous website,” Kiran said.

The sisters, who have been in Canada since January 1 this year, said they “decided to speak because everyone thinks (they’re) missing or dead or worse.”

The sisters said they know the lavish lifestyle they portrayed on their social media accounts led some to question their motives but they reiterated that they’ve never blackmailed or extorted anyone, despite dating some of Nigeria’s wealthiest men.

“I think just dating someone in the oil and gas sector you get more opportunities to travel a bit more, you get to do things maybe you wouldn’t have done. The way the media reported it, they called us sex workers, prostitutes… I’ve never done anything like that. I’ve never blackmailed anyone, never extorted anyone. I think the stain on our reputation will never be cleared,” Jyoti said.

They said they have no intention of returning to Nigeria even as several arrest warrants have been issued against them as they have missed a couple of court appearances. The case against them returns to court May 22.

Global Affairs Canada said “consular services have been provided to the Canadian citizens who had been detained in Lagos, Nigeria.”

Rachel Eta Brown an immigration lawyer with Pace Law, Nigeria, said that the women cannot be found criminally responsible if they don’t attend court as there is no existing treaty between Canada and Nigeria that allows for extradition.

#Trending: Are Commercial Buses a Better Transport Option as opposed to Ride-Hailing Services?