Debby Osa: Find Something You Excel at & Polish It Until You're a Priceless Gem 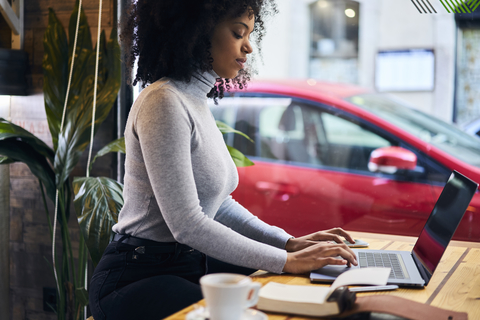 After my last article on success and limiting relationships, I got feedback – and a mail in particular – that prompted this article. This is going to be a long post, so get ready. (By the way, a shout-out to Weezy for the different perspective you shared. I almost wanted to reply – and explain, but then, I thought “Nahh.” 🙂 Thanks again to all those who comment.)

One thing I’ve noticed about almost every successful person is the confidence they exude – the air they give off of having it all together. Despite their genders, fields, ages, languages, or locations, people who are considered ‘successful’ generally have one thing in common:

They operate in their areas Of strength. When you watch these people in their zones, you could almost idolize them. Tiger Woods – Golf. Beyonce – Music. Kunle Afolayan – Movies. Damola (your tailor) – Aso-Ebi.

Another similarity these people share is an acknowledgement of their ‘weaknesses’.

• Oprah laughs and says before millions of viewers all over the world, “Hey, I don’t have a university degree, so I don’t know what you are talking about…” and everyone laughs.

• Iya Sikira at Stadium bus-stop retorts, “Ki lokan mi pelu fiska polisi? (What’s my business with fiscal policy?)”, while the government officials who determine the same fiscal policy book her for every event and home delivery – because her jollof and efo-riro is to die for!

You see, these people don’t bother trying to fit into holes they are not suited for. They know their strengths.

It can, therefore, be very heartbreaking to find people who disdain their natural gifts and talents, and struggle to force themselves into unsuitable niches. Many insecure people are either passive – not doing anything with their gifts, or operating in their ‘wannabe’ zones – where they try too hard.

I know someone who has always loved reading and writing. She has always been a scribbler – always finding it effortless to pen down her thoughts. Depending on her mood, her emotions just flow through her pen. She thought it was normal. She didn’t think much of it.

In her primary school, she would exchange her snacks for novels. One day, to keep the class quiet, the teacher asked them to summarize a book they had read. When she was done, the teacher asked her if she had copied from the book. She said no. The teacher was silent and gave her 10/10. She didn’t think much of it.

One day in secondary school, she and a few friends committed an offence. Their punishment was to kneel down in the staff room for an hour, and write their English essay tests – on their knees. In a few minutes, she was done. The teacher looked amazed as she read through, and gave her the highest score in the class. She didn’t think much of it.

She was a science student, and barely averaged her science courses – but made A’s in English and Literature. She didn’t think much of it.

One time, her elder sister snuck into her room and ransacked it, looking for the concluding part of a novel she had been writing. She didn’t think much of it.

In her first year in school, she was busy helping her roommates, who were final year English students, with their homework. She didn’t think much of it.

She wrote an exam, and the English lecturer announced her number, asking her to see him after the lecture. He didn’t know her. She walked up to him, and he showed brought out her essay script and said, ‘You write well. Keep it up.’ (I’m sure you are getting the hang of this.) She still didn’t think much of it.

She gained admission into the university to study – wait for it – Microbiology.

She missed lectures. She hated to see her grades. Her confidence dropped when it came to academics.There was an incident where one of her lecturers angrily told her, “I told you to write on microbial physiology. You are writing psychology for me.” That was hilarious!

She finished school – and still didn’t see writing as important. She wanted jobs that would bring the big bucks and prestige. She got those jobs. She loved some and positively loathed others.

She became an entrepreneur – she still is – and she loves it.

The irony is that writing pays part of her bills now. She never knew it could.

Recently, someone close – and an extremely good writer – recommended her to a client who needed a script for a particular genre. She sent him a draft, and he called her referee and says, “Did you help her with the writing? She’s good!” The referee only laughed.

You see, I was that girl – or woman now :), and I gave the above illustration to show how many people end up very insecure, simply because they are blind to what is obviously in their hands.

There are a number of reasons for this:

(1) A few people do not know what their gifts are. If you are in this category, ask yourself, “What do I do really well and easily? What do people consistently tell me I’m really good at?” This might take some soul-searching but, trust me, it’s usually right in your face.

(2) Many others despise it because it comes too naturally, too easy for them. They didn’t struggle to get it, so it must not have that much value. That’s why it’s called a ‘gift’, my friend! (By the way, your ‘too easy’ gift is meant to be an ‘Oh, Thank God!’ blessing for someone else.)

(3) For the bulk of people, it’s not glamorous enough. They can create the most mouth-watering foods and snacks, but can’t imagine being known as a ‘cook’ or ‘chef’ or – God forbid – ‘caterer.’ They would rather have a 9 to 5 job on the Island with an official car and driver, and be called ‘the head and associate director of the department of economic and market research and technological turbulence’ …or something sounding like that.

(4) For many others, it is the fear of ‘What will people say?’. Taking care of children ignites the joyful spark in their hearts, but they reason “What will my mates on the board of Fortune 500 companies think if i start a creche?”

(5) Others think theirs is insignificant. “Okay, I am a good listener and I give good advice. So? What can anyone do with that?” I know someone who has this amazing gift, and went on to study Guidance and Counselling. She owns her own company now.

(6) Some simply have the crowd mentality. Writers trend one day, so they begin to write. Make-up artists trend another day, so they rush out to buy palettes…

…and the list goes on and on. No wonder many people are insecure and feel miserable! There is something about doing what you are good at that releases your juices, puts a spring in your steps and lifts your head high.

Someone gave this illustration: If skills were numbers,
Excellent or perfection is a 10. People will come from ANYWHERE and pay ANYTHING for a 10 skill.
Our natural gifts are a 7 or 8. When you hone them diligently, they can become a 10.
Our weaknesses are a 2 or 3. Despite your efforts and polishing, all you can be is a 5 – or at best, a 6. Just average.

Does it not make sense to find what you naturally excel in – and polish it until you are a priceless gem – instead of spending your time, effort and energy on trying to be merely average?

Osisiye Tafa: The Things That Were Not Left For God