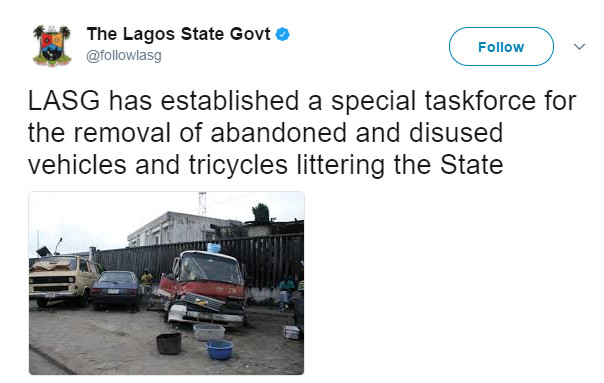 The Lagos State government has said that starting July 1, 2017, it will begin to evacuate abandoned vehicles littering the state.

LASG has established a special taskforce for the removal of abandoned and disused vehicles and tricycles littering the State.

The special task force is in furtherance of the spirited effort to make Lagos State cleaner, healthier and more liveable,

The activities of the task force will commence from Saturday, July 1st 2017.

Consequently, Lagosians are hereby notified of the operational procedure of the Taskforce as follows:

i. Pasting of Removal Notice Stickers on identified abandoned vehicles with a 7-day period for self-removal by owners of the vehicle

ii. Upon expiration of the grace period, identified abandoned vehicles will be removed by the taskforce to a designated depot within the State.

iii. Where such vehicles are unclaimed within 30 days, the vehicles will be forfeited to the government and undergo proper disposal accordingly.

The General public is hereby advised to comply strictly with this directive while Security agencies are urged to ensure compliance.