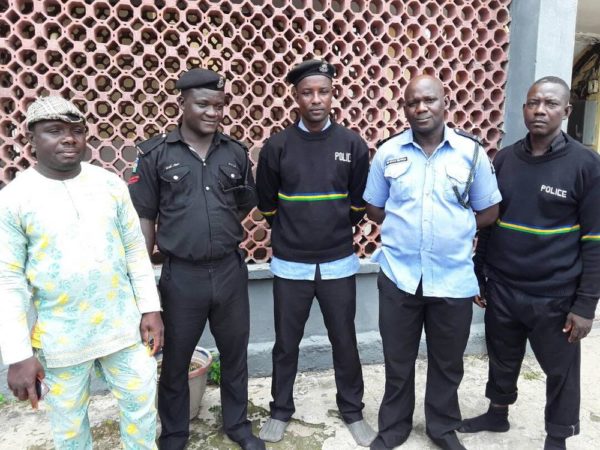 From left: The commercial motorcycle rider, policeman involved and his colleagues

The Lagos State Police Command has released a statement regarding a video of a policeman with a POS machine, debunking the claim that the policeman was using the machine to receive bribe.

The video which was circulated on social media on Wednesday showed a policeman stationed in the Mafoluku, Oshodi area of the state holding a POS while standing behind a motorcycle with a man who appeared to be the motorcyclist.

A caption of the video claimed the policeman was extorting for bribes with the use of the POS.

The Lagos State Police Command Public Relations Officer ASP Olarinde Famous-Cole in the statement said the policeman is under investigation, and no policeman in the state is in use of a POS machine.

In a video shared by the command, the commercial motorcyclist involved said that they were stopped and searched and let go, adding that the POS machine was found on his passenger.

The statement said a passenger of the motorcycle was the owner of the POS machine, and the policeman only inquired to know why he had a POS machine in his bag.

“The Lagos state police command would like to inform the general public that none of its personnel is in use of a POS machine in any part of the state.

The command would also like to state that the officer in the video is being investigated and the commercial bike rider has given a factual account of the event that happened to justify the actions of the police officer.”

The officer and his team on that fateful day accosted a commercial bike rider and passenger who had a bag on him. The passenger upon inquiry from the police officer about the contents of his bag, brought out a POS machine and other documents.

When asked why he was in possession of a POS, the passenger said his customers usually paid for their utility bills with the POS machine. The passenger was then asked to produce a form of identification which he did and was asked to go by the policeman that accosted him,” the statement said.