Read Chude Jideonwo's Rare Encounter at 2AM in Surulere, Lagos 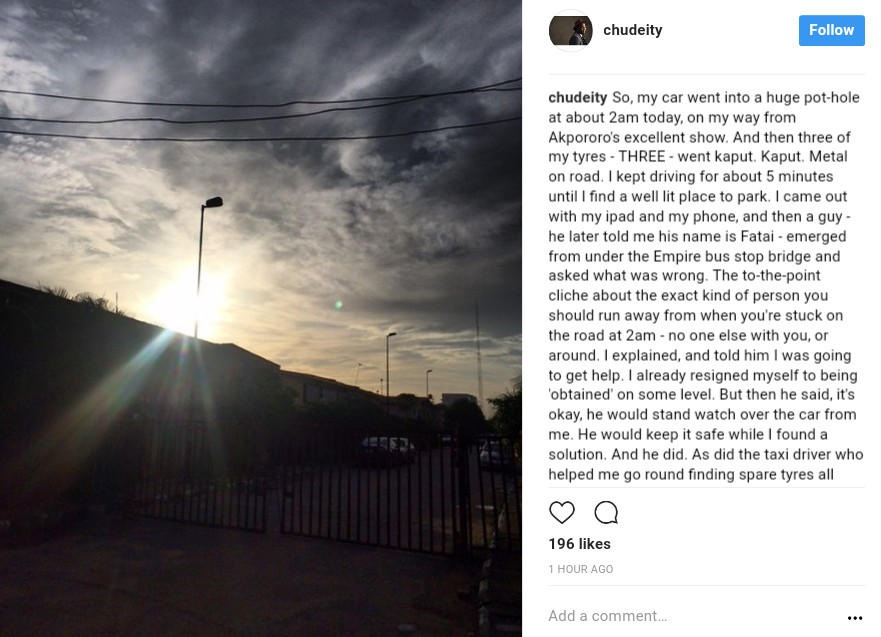 Co-founder of RED Group Chude Jideonwo took to hus Instagram page Monday to share an encounter he had in the Surulere area of Lagos at 2AM, with two people he had never met before.

Read what he wrote below:

So, my car went into a huge pot-hole at about 2am today, on my way from Akpororo’s excellent show. And then three of my tyres – THREE – went kaput. Kaput. Metal on road. I kept driving for about 5 minutes until I found a well lit place to park. I came out with my ipad and my phone, and then a guy – he later told me his name is Fatai – emerged from under the Empire bus stop bridge and asked what was wrong. The to-the-point cliche about the exact kind of person you should run away from when you’re stuck on the road at 2am – no one else with you, or around.

I explained, and told him I was going to get help. I already resigned myself to being ‘obtained’ on some level. But then he said, it’s okay, he would stand watch over the car from me. He would keep it safe while I found a solution. And he did.

As did the taxi driver who helped me go round finding spare tyres all around Surulere. Both of them became my guardian angels, telling me what to do, helping me change my tyres, assuring me I’d be fine.

It still makes no sense to me, you know? It would have been more rewarding for Fatai to take my phone, my iPad or something from the car. What possesses a man who has no home, and hangs around bridges at night and even has no phone l to choose empathy / even if in hope of a tip / over easy theft? To commit to helping a stranger in the middle of the night, and to keep his word? I am glad for the burst tyres. I seriously am.

Any experience that refreshes my faith in the human spirit is a gift. /// Including my team members – three of them – who insisted on coming out at 3am to help. Thank you, Jesus for sending me angels. I live for moments like this!