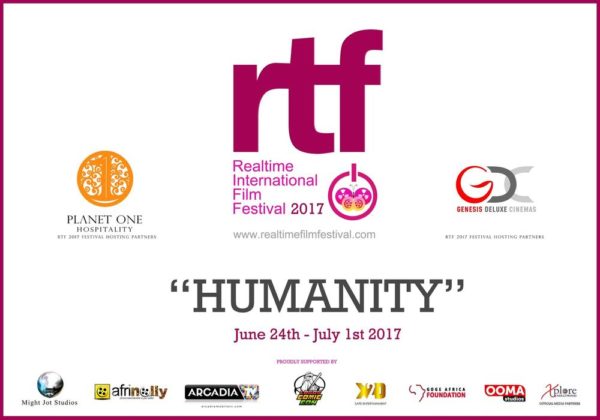 RTF is a technology driven film gathering which supports remote participation – making it a truly global festival that can be attended from any part of the world. They employ the use of current technology to achieve the Real-Time attribute of the Festival, whereby both the participants in Lagos and those from across the world can interact and share ideas and experiences via Tele-Presence, Video Conferencing, Live Streaming and Skype.

During the inaugural edition last year, RTF had over 800 submissions from 80 countries out of which 60 films from 25 countries were screened.

Now, the 2017 edition is here. The Festival Catalogue Theme for 2017 is “HUMANITY” while the Festival Program Theme is “Extensive Production Conversations.

This year, 148 Films (Animations, Short Films, Feature Films, Commercials, Music Videos, Music Films, etc) from over 40 countries were selected for screening, including some movies made by kids. Yes! Not only would movies of Kids (Aged 7 – 15) who are already Filmmakers be screened during the festival but there will also be Film Production Support for Child Filmmakers, courtesy of Goge Africa Foundation & Film Resolve. How Cool! Click here to see full list of selected films.

While the festival officially commences on Saturday, the 24th of June, 2017, the opening film – Setback of the Spirit by Sa’ed Arouri would be screened on Sunday, June 25th at Genesis Cinema, Maryland by 5:30pm. This festival would be a great opportunity to network and learn about film-making and technology. Click here for venues and full festival schedule or see overview below:

RTF is an Independent, privately funded Film Festival which seeks to promote the Artistry in Filmmaking. Our special emphasis is on Artistic Films. We hope to see you during the festival

The Wait for #BakeFest Heat Up as Waje, Alexx Ekubo & Mai Atafo throw Friendly Shade at Each Other | Monday, June 26th