Kayito Nwokedi: Is FASHION just for 'Fashion People' or is it for Everyone?

There’s a reason why the “fashion” in the title of this article is in capital letters. It refers to Fashion – the concept, not fashion – the clothes. There’s a huge difference between the two, and the next few paragraphs will hopefully explain so.

May God bless the inventor(s) of Instagram. The pictorial-focused app has helped build relationships, inspire businesses, heighten vanity, and provide ideas. For fashion folk like myself, it is a hub for sartorial inspiration. Ever so often, I’ll pick up my phone and tap on the explore icon when I open the Instagram app, hoping that some form of clothing “newness” catches my eye, despite the fact that it is often said there’s nothing new in fashion (which is impossible because season after season, I stumble upon new things). 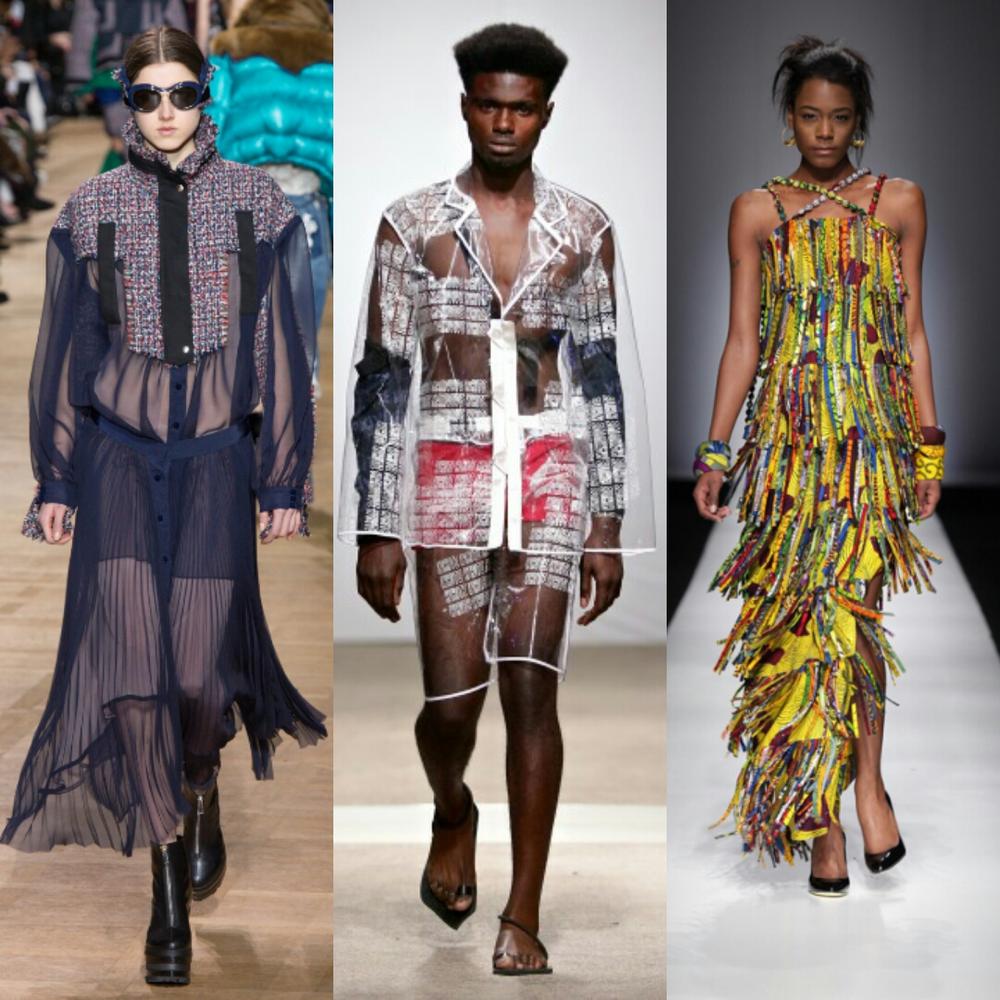 For instance there are the London wunderkinds, Christopher Kane and J.W.Anderson, whose clothes are filled with somewhat unsettling propositions that are later distilled for “regular people” to digest or Paris’ Chitose Abe (of Sacai) whose design vocabulary is based on hybridization (a lace trench with a hidden built-in drawstring that miraculously transforms it into a trompe l’oeil blouse and skirt, for example). Here in Nigeria, Ituen Basi‘s deconstructed Ankara dresses or Maxivive‘s plastics coats are still proving a bit difficult to digest amongst spectators. The resilient spirit in me hungers and hopes to find that new invention, and I’m often never disappointed. After all, when Yves Saint Laurent introduced the ‘Le Smoking’, it was scandalous for a woman to be seen in a tux-style pantsuit.

There’s a reason why collections are shown six months before they hit stores. Like the Saint Laurent example above, “regular people” saw his invention as rebellious and defiant. They hesitated at first till they saw equally defiant style-conscious women (such as Bianca Jagger, who wore his white wide-legged Le Smoking for her wedding to Mick Jagger) try on his creation. From there, the invention spread mainstream.

Sometimes, it takes years for a design idea to be accepted by the masses, but fashion people are often seen already wearing these “crazy” design ideas. Maybe that’s why the fashion community is often seen as snobbish because they seem to understand that what the designers propose mean more than meets the ordinary eye. Again, back to the Saint Laurent example; tuxedos that are seemingly supposed to be for men only, but are now worn by women, can fall under today’s term of “gender-fluid” dressing. 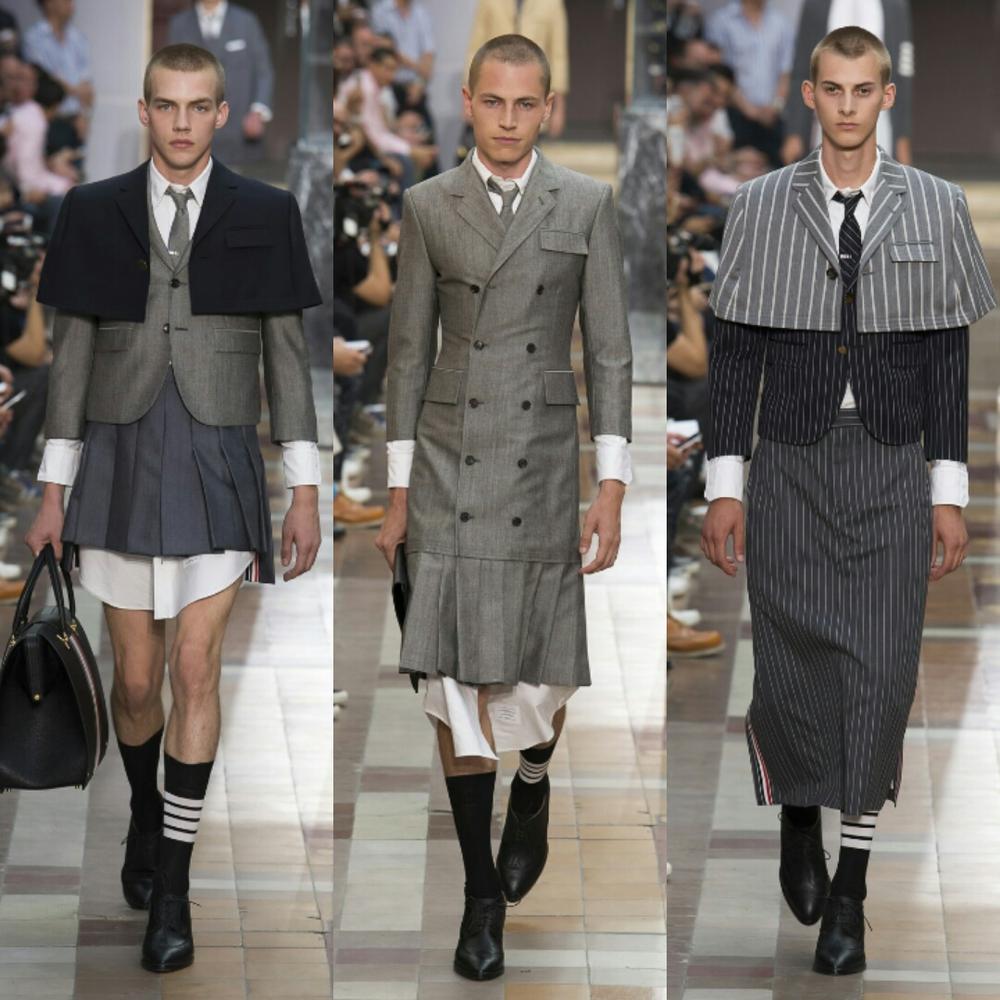 It is only acceptable because it is an invention that has lasted decades. Yet, still, the idea of skirts for men (save for Scottish kilts) still raise eyebrows every time they walk the runway. And this isn’t even about sexuality. It is more about the fact that men SHOULD NOT wear skirts, and why is that so? Would it ever be accepted? Is it made just for the fashion community? Maybe Thom Browne‘s latest collection would be ubiquitous decades from now, who knows?

There are also those who do fashion (clothes). The ideas for this category are often culled from the conceptual ‘Fashion’. Pleated skirts? They could have been simplified from the complexities of Madame Grès‘ career-defining plissés. Fluid curve-hugging slip dresses? The technicalities of Madeline Vionnet‘s bias-cut technique birthed that. How about shifts? It is a filtered form of the genius of Cristobal Balenciaga‘s chemise. So technically speaking, without the design iconoclasts, we really wouldn’t have “regular clothes”.

This just goes to show the power of fashion, and how something that is often scoffed at for its superficiality can become a reflection of the times we live in and a debatable subject. Trousers for women? Skirts for men? It is funny how in this particular period of our existence, sex and sexuality are more important than ever, and fashion is the experimental tool that is used to tackle those subjects head-on.

All the above really just proves one thing: Fashion is ultimately for everyone.

Related Topics:and provide ideas. For fashion folk like myselfand the next few paragraphs will hopefully explain so. May God bless the inventor(s) of Instagram. The pictorial-focused app has helped build relationshipsBianca JaggerChitose AbeChristopher KaneChristopher Kane and J.W.Andersondespite the fact that it is often said there's nothing new in fashion (which is impossible because season after seasonheighten vanityhoping that some form of clothing "newness" catches my eyeI stumble upon new things). For instance there are the London wunderkindsI'll pick up my phone and tap on the explore icon when I open the Instagram appinspire businessesit is a hub for sartorial inspiration. Ever so oftenItuen BasiJ.W.AndersonMaxiviveMick Jaggernot fashion - the clothes. There's a huge difference between the twoSacaiSaint LaurentThere's a reason why the "fashion" in the title of this article is in capital letters. It refers to Fashion - the conceptYves Saint Laurent
Up Next