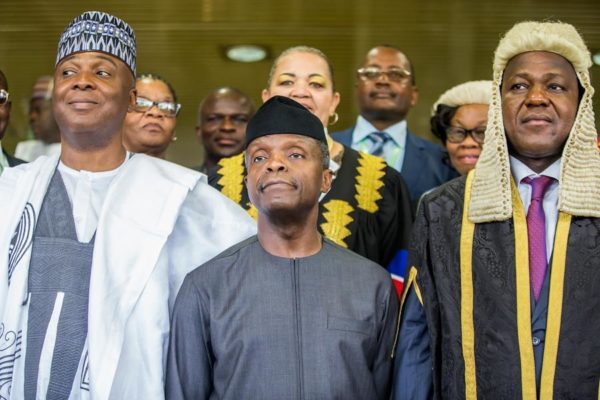 Acting President Yemi Osinbajo, while declaring open the 16th Commonwealth Speakers and Presiding Officers Conference, Africa Region at the ECOWAS Parliament Complex in Abuja, charged Nigerian leaders to learn a measure of humanity as the “reality for the majority of our peoples is the misery of the slums and the indignities of powerlessness.”

“While we describe ourselves as Excellencies, distinguished and honorable the vast majority our people would in their most polite moments say that they see neither excellence nor much honour in their own lives,” Osinbajo said.

He also debunked reports that the Executive and Legislative arms of government are at war with each other. 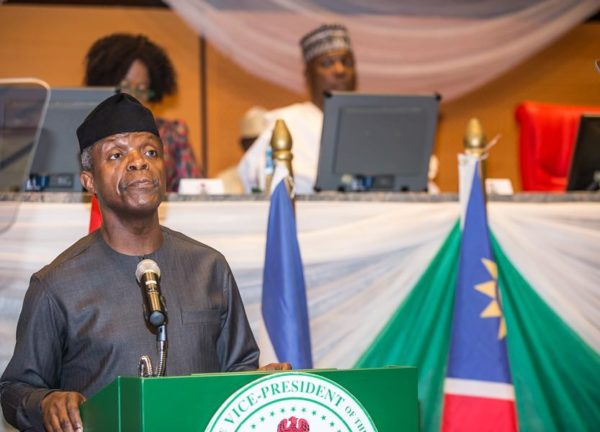 It is my pleasure to address this gathering of Speakers and Presiding Officers of Parliaments from across the Commonwealth’s Africa Region.

I congratulate my brother, Rt. Hon. Speaker of the House of Representatives of the Federal Republic of Nigeria, Yakubu Dogara for successfully steering the affairs of this elite association since November 2015 when the 15th Conference in Accra, Ghana approved the National Assembly of Nigeria as the next host.

On a lighter note, I don’t know the experience, of presiding officers from other nations present, of the portrayals by the press of the relationship between the executive and the legislature.

Here in Nigeria what makes the news is the conflict between the executive and the legislature. The more dramatic the alleged conflict the more newsworthy. There’s something about rumours of us wrangling and quarreling that always seems to catch and hold the attention of our friends in the traditional and social media.

If you closely follow the news here for example, you will regularly be confronted – especially in recent weeks – by ‘Exclusive’ and ‘Breaking News’  reporting  of several different stories of conflict between the executive and the legislature.

Now anyone who sees the combined size of the distinguished Senate President and the Rt. Hon. Speaker compared to mine must know that it would be a suicide mission to threaten either of these two gentlemen let alone both of them.

It was Stephen Hawking, the renowned British theoretical physicist and Cambridge professor who recently declared that we live in the most dangerous time in the history of the world. Citing climate change, food security, overpopulation, and inequality, but more importantly he spoke of the anger of the ignored and marginalized majority.

But his solution is even more thought provoking. He argues that to save our world it would require the elite to learn the lessons of the past and above all, to learn a measure of humanity.

I would ask that you indulge me for a few minutes to talk about the changing times and the burden of the political elite especially the legislature and the executive.

What did Hawking mean by learning a measure of humanity? It means to put ourselves in the position of the most deprived in our societies to stand in their shoes and to sit where they sit, to feel their pains and understand that their frequently dashed hope is that the political elite know that the heavy burdens they bear is ours to lighten.

The sharp rebuke of the establishment by the Brexit vote and the American election results show that even in the more comfortable democracies of the world the people are angry.

In Africa and the developing World the angst and cynicism of the populace is worse. Conflicts, corruption, weak institutions have ensured that the largest numbers of the poor and deprived come from our continent and there is unanimity of opinion that it is the failure of leadership. So while we speak of our legislative halls as hallowed chambers, our courts as temples of justice, and the executive villas as corridors of power, all suggestive of grand but isolated institutions.

The reality for the majority of our peoples is the misery of the slums and the indignities of powerlessness.

So, while we describe ourselves as Excellencies, distinguished and honorable the vast majority our people would in their most polite moments say that they see neither excellence nor much honour in their own lives.

Your Excellencies and my distinguished honorable brothers and sisters:

The leadership positions we occupy is a short lease that providence and the electorate have given us to shape the present and determine the future of millions and the generations that will be born to them, it would be foolish indeed to think that it is an occasion for self-aggrandizement or the pursuit of selfish interests.

The responsibility that privilege and power placed upon us is to do our utmost to change the current bleak narratives and projections for our nation and the world.

Poverty, hunger and disease can truly become history by the pursuing those legislative and executive options that target education, food security, healthcare for all.

Let me say that the National Assembly and the executive have shown that when we work together we can make the quantum leaps in bettering the lives and livelihoods of our people.

In the last two years, Nigeria which is the largest producer of rice in West Africa and the second largest importer of rice in the world has changed that story. Our rice import bill in 2014 was N1billion a month.

Importation of rice has dropped by over 80 percent and we will be self-sufficient in rice production by the end of 2018. We have empowered the rural farmers, over 1.43 million rice farmers alone.

Again because we chose to work together the National Assembly at the request of the Executive appropriated N500 billion about $3 billion for the largest social investments programme in sub-Saharan Africa.

The fund allows us to engage 500,000 young graduates in our N-Power scheme, to give cash transfers to a million of the poorest in our society, to extend microcredit to a Million market women, artisans, and small businesses. It enables us to begin a social housing fund in the sum of N1 trillion with government putting in N100 billion annually. The fund will provide finance on a counterpart basis for developers and create mortgage facilities that will ultimately enable anyone to pay about  N30,000 a month to own a home.

The executive and the legislature in the worst days of the Boko Haram tragedy  also worked together to ensure that adequate provision was made for the military including prompt passing of virements when initially budgeted funds ran short. We decimated the Boko Haram as a fighting force, and ensured that they control no part of Nigerian territory.

It is therefore my submission that the burden that the privilege of leadership places upon us is that our tenured positions in the executive and legislature must not be wasted on conflicts and division. The problems are too grave, the lives and livelihoods of millions depend on our cooperation, we cannot afford to fail.

Distinguished delegates, as much as I might have loved to remain here and participate in all your deliberations, I also do not want to tempt our editor friends with anything that might justify a headline like “Acting President Overstays Parliamentary Welcome”, in tomorrow’s papers.

I will therefore excuse myself, but not before thanking you for the privilege to address you this morning, and wishing you very fruitful and successful deliberations today.

It is therefore my honour to declare this conference open.