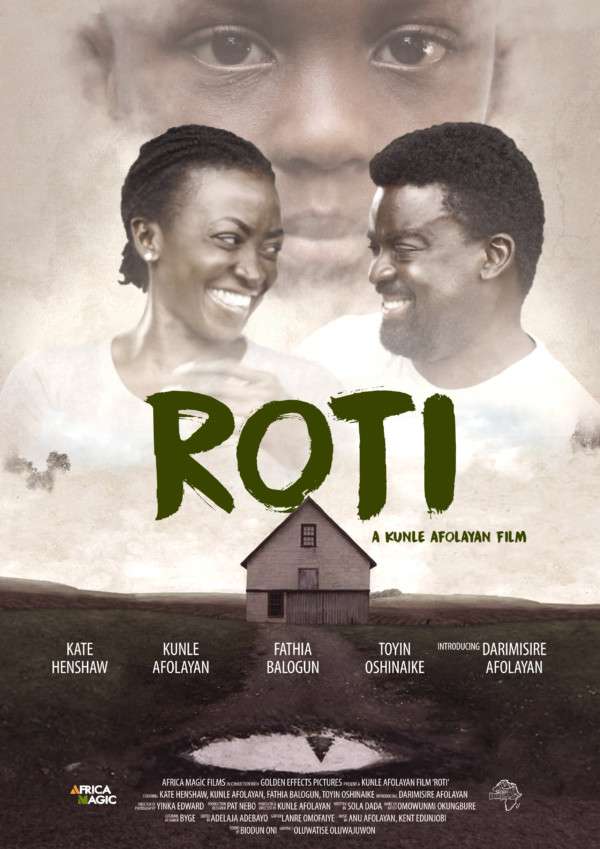 Diane and Kabir Shittu (Kate Henshaw & Kunle Afolayan) after a long period of childlessness are blessed with a son, Roti (Darimisire Afolayan) but sadly, the boy passes on his 7th birthday. The parents (especially Diane) are distraught but things get really weird when 5 years later, a boy who looks exactly like their deceased son surfaces.

This is definitely one of the fascinating storylines out of Nigeria in recent time. When I saw the trailer and read the synopsis for Roti, I was genuinely enthralled because the idea of reincarnation exists in our culture and religion but is largely unexplored in Nollywood.

In classic Kunle Afolayan style, the cinematography and directing was top notch. I particularly liked the “ordinary” feel persistent throughout the film to give the impression that the characters were everyday people. This outlook was executed across every facet of the film- the characters weren’t heavily made up or looked affluent and their residence too was quite basic. The joy with this direction is that it made the movie, its characters and events very relatable.

Another aspect of the move that pleased me unending was the “horror” feel of the film. There was extensive use of horroresque incidental music and camera works and the picket fence around the residence which gave the movie an unnerving and haunting feel that gripped the audience.

However, Roti had a few drawbacks most evidently, the climax of the film. When I read the plot of Roti, my worry was how the conflict was going to be resolved and in all honesty, the conclusion was quite underwhelming. The film ended at the time when I expected it to kick into high gear and I guess the idea was to leave us suspended in some form of a cliffhanger but it left the film feeling like an unfinished sneeze.

If you ask me, I think Roti should have been shot as a Yoruba film where the full mystical element of reincarnation will be developed across cultural/traditional lines rather than the orthodox angle that the film takes because, with the intention of appealing to a wider audience, the film lost some bite.

Roti is a decent psycho-thriller and borderline creepy film with Kate Henshaw and Kunle Afolayan putting in a masterful performance. Even Afolyan’s kid, Darimisire wasn’t half bad as the titular character.

For more reviews, go to tharevue.com

“Settled”! Falz and 9ice have Dinner together | Watch