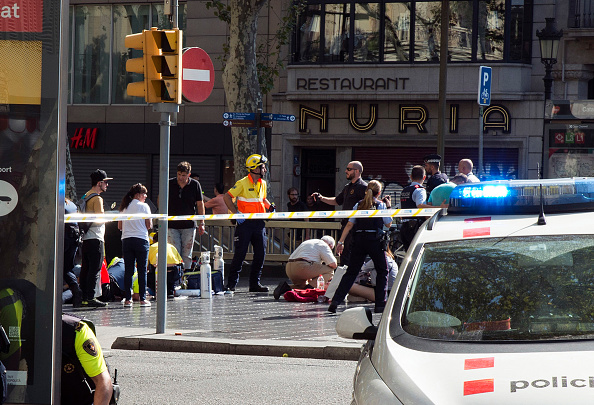 At least 13 people were killed and more than 50 injured on Thursday when a driver deliberately slammed a van into crowd on Las Ramblas regarded as Barcelona’s most popular and busiest street.

The Catalan police said they had arrested one suspect in what is regarded as a “terror attack”, and denied earlier reports that the perpetrator was holed up in a bar near the scene.

The famous Las Ramblas is lined with shops and restaurants and normally thronged with tourists and street performers until night.

Spain’s royal family condemned the assault in unusually strong terms, vowing that their country would not be “terrorised” by extremists.

According to Aamer Anwar, a witness at the scene, he said he was walking down the street which he described as “jam-packed” with tourists and “all of a sudden, I just sort of heard a crashing noise and the whole street just started to run, screaming. I saw a woman right next to me screaming for her kids.”

Spain had so far been spared the kind of extremist violence that rocked nearby France, Belgium and Germany.

“The United States condemns the terror attack in Barcelona, Spain, and will do whatever is necessary to help,” US President Donald Trump tweeted.

France’s President Emmanuel Macron whose country witnessed a similar horror when a Tunisian man ploughed a 19-tonne truck through a crowded boulevard in Nice, killing 86 people in July 2016 said his thoughts were with the victims of the “tragic attack”.

A spokesman for German Chancellor Angela Merkel condemned the “revolting attack” and British Prime Minister Theresa May said on Twitter that London “stands with Spain against terror”.

The Nice carnage and other assaults including the 2015 Paris attacks were claimed by the Islamic State jihadist group and according to the interior ministry, more than 180 “jihadist terrorists” have been arrested since 2015, Punch reports.

FG hands over Presidential lodge in Marina to LASG