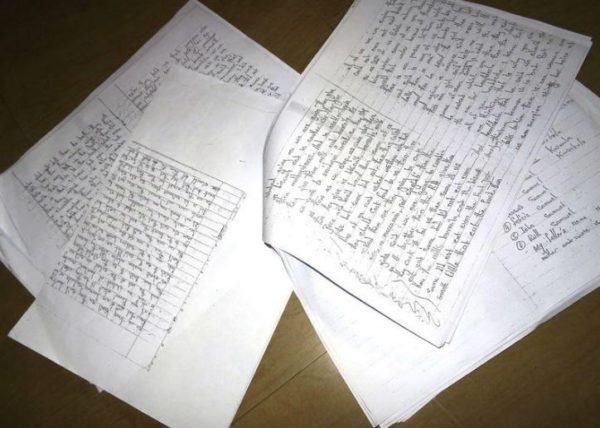 A dairy kept by some of the 276 Chibok Girls kidnapped by Islamic sect Boko Haram during the time of their captivity has surfaced.

According to Reuters, the diary was released by one of the girls who has been released in Abuja, at the location where the Federal Government is holding them for a “restoration process.”

The diary claims that their kidnap was not the reason the terrorists invaded their school. It says Boko Haram insurgents had stormed the school to steal machinery for construction.

The insurgents had arrived at the school to find the machinery missing. The girl said they had debated over what to do with the girls.

She wrote in the diary: “One boy said they should burn us all, and they said: ‘No, let us take them with us to Sambisa … if we take them to Shekau, he will know what to do.'”

While the authenticity of the diary cannot yet be ascertained, it reveals the horrors the girls underwent while in captivity.

The girls said they started keeping the diary a few months into captivity.

The insurgents had handed them writing materials – notebooks and pens – to use for Koran lessons, but one of them decided to keep a diary instead.

Five girls are said to have contributed to the diary, written mainly in English, and sometimes in Hausa.

“We wrote it together. When one person got tired, she would give it to another person to continue,” one of the girls said.

The dairy reportedly contains stories of regular beatings, Koran lessons, and pressure to marry and convert.

The girls, to strengthen their spirits and amuse themselves, devised mocking names for the insurgents as inside jokes.

In one of the entries, five girls had tried to escape and were caught by the insurgents.

They tied the girls up and dug a hole, turned to one of the other Chibok girls and handed her a knife, saying: “Cut off the girls’ heads, or lose your own.”

“We are begging them. We are crying. They said if next we ran away, they are going to cut off our necks,” the girl wrote.

In another entry, the girls who refused to convert to Islam were gathered by the terrorists who brought out jerrycans and threatened to douse the girls in petrol, then burn them alive.

The diary read: “They said: ‘You want to die. You don’t want to be Muslim, we are going to burn you.”

A particularly chilling entry describes the fear the sect has instilled in the hearts of Nigerians in the North-east.

It describes the escape of few Chibok girls, who ended up in a shop where they asked the owners for help, as well as food and water.

The diary read: “The girls said: ‘We are those that Boko Haram kidnapped from in Chibok.’ One of the people said: ‘Are these not Shekau’s children?'”

The shop owners had allowed the girls stay overnight, but the following morning the girls were returned to the Boko Haram base.

The diary said they were whipped on their arrival, and threatened with decapitation.

The girl said though she’s happy for her freedom, she still worries over one of the co-authors of the diary who is still in captivity, having married a Boko Haram insurgent.

She said: “She got married because of no food, no water. Not everbody can survive that kind of thing. I feel pained … so pained. I’m still thinking about her.”

On Becoming A Philanthropist! Toke Makinwa will donate N3m to empower 4 Nigerians #OnBecomingEmpowered