The Senate & Police are enemies of Nigerians - #ResumeOrResign Protesters 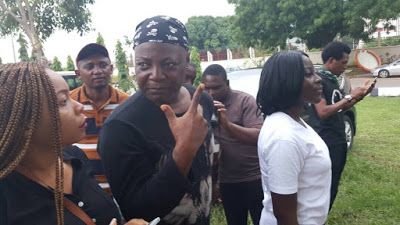 The #ResumeorResign protesters have reacted to comments made by the Senate on the protest asking President Muhammadu Buhari to resume office or resign after his three-month absence.

In a statement released by the group, they said that the brutality of the Police against them was unprovoked.

They condemned the Chairman of the Media Committee of the Senate, Aliyu Sabi Abdullahi for his comments on the sit-outs.

Abdullahi had according to NAN referred to the protest as “noise making,” saying the President has broken no law by staying away from the country for so long. He said:

The president has broken no law and therefore we do not see any justification for this diversion and noise-making.

The sponsors are merely seeking cheap publicity at the expense of the peace of Nigeria.

We, in the National Assembly, are satisfied that there is no vacuum. The Federal Government is working.

Acting President Yemi Osinbajo is providing the required leadership. So, there is no reason for the protests.

All Nigerians now should focus on praying for the safe return of the President.

We in the Senate are happy about the report by the governors and party leaders, who recently visited President Buhari in London and we know he will soon return to continue to provide leadership to our people and the rest of Africa.

We therefore call on the protesters to stop all these demonstrations and let their sense of patriotism overshadow the zeal for activism by joining other Nigerians to pray for the president.

Read the statement by the #ResumeorResign protesters:

1. We have read with utter dismay the statement credited to the Chairman of the Media Committee of the Senate, Aliyu Sabi Abdullahi, condemning our daily #ResumeOrResign sit outs. Abdullahi’s comments were lacking in the depth, insight and critical analysis expected of a Senator of the Federal Republic of Nigeria.

2. We have also read the statement credited to the FCT Abuja Command of the Nigerian Police Force that it was compelled to disperse today’s sit out because it was infiltrated by miscreants and criminal elements. It is disheartening that a law enforcement agency can resort to such brazen and easily disproved lies, especially in the face of an abundance of evidence that participants at the sit out conducted themselves with decorum and within the ambit of the law.

3. It is shameful that Abdullahi and the Nigerian Police deliberately fail, refuse and neglect to recognise that the Constitution of our beloved nation guarantees all Nigerians the right to peacefully gather in furtherance of peaceful and lawful adjectives.

4. For the avoidance of doubt, we hereby clarify the following facts:

a. We informed the Police and the State Security Service (SSS) of our intention to hold this peaceful sit out starting from Monday August 7th, 2017.

b. Having conducted ourselves peacefully and properly on Monday, we sought to conduct our daily sit out in the same manner today. We were surprised to find Policemen at the Unity Park venue of the sit out in large number but sought to peacefully go about our affairs.

c. None of the participants at our sit out was armed or carrying weapons of any sort.

d. None of our participants were confrontational or aggressive with the Police. At various points, we insisted on our rights to peacefully gather but at no time was any policeman or officer threatened with physical violence of any sort.

e. There is an abundance of evidence on social media that shows that at all times the Nigerian Police was the aggressor using attack dogs, tear gas, water cannons and other such materials to threaten, harass and intimidate participants at the sit out.

5. In the face of such evidence, it is shameful that a Senator, who ought to act as a custodian of our laws and deploy deep insight in the protection of the civil rights and liberties of the Nigerian people, speaks in such a manner. It seems that Abdullahi requires a crash course in the protection of the civil rights of the Nigerian people. In this wise, we refer him to the comments of Senator Shehu Sani where the latter clarifies that we have a right to convene peacefully to press home our demands.

As it stands, with comments like the ones made by Abdullahi, it seems as though the Senate has taken an anti-people position and is willing to side with the cabal that seeks to hold Nigeria and all Nigerians hostage by every means necessary.

It is, therefore, imperative for all members of the Senate such as Senator Shehu Sani who are willing to side with the Nigerian people to stand up and speak out in order to protect our democracy.

6. It imperative to note that while the Nigerian Police deployed a considerable amount of manpower, resources and arms to harass and intimidate law abiding Nigerian citizens, Boko Haram (the terrorist organisation) attacked and killed 31 fishermen in Baga, Borno State. The Nigerian Police Force, and indeed the Federal Republic of Nigeria, will be better served if such critical assets as were deployed to harass and intimidate innocent and law abiding Nigerians were deployed to combat terrorists who seeks to violate our territorial sovereignty and abrogate our constitutional rights and freedoms.

7. In furtherance of our rights as guaranteed by the constitution, we reiterate our position that:

a. The Nigerian people deserve to know the true state of health of President Muhammadu Buhari.

b. The Nigerian people deserve to be governed by a President who is fit to perform the duties of his office.

c. That after spending 93 days abroad, it is imperative that President Buhari returns to Nigeria to carry out his functions as President of the Federal Republic of Nigeria or he resigns from office so he can cater to his health.

8. In this wise, we will continue our daily sit out tomorrow Wednesday August 9th, 2017. We invite all Nigerians and all members of the media to join us.

For Our Mumu Don Do Movement

For: Foundation For True Freedom and Good Leadership

For: Movement For The Advancement Of National Transformation

For: Coalition in Defence Of Nigerian Democracy

For: Campaign For Democracy