Buhari came in with a rescue mission; only ill-health can stop him in 2019 - Gov Amosun 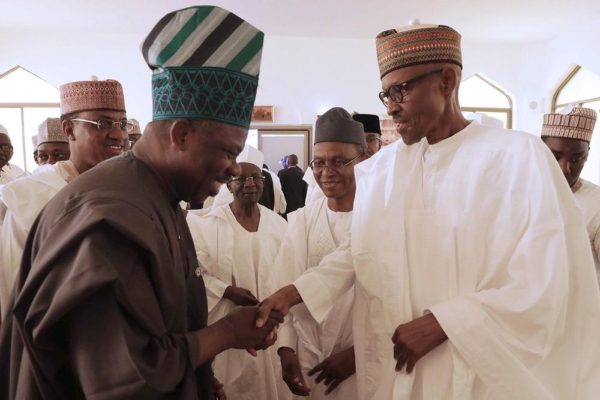 Governor Amosun (L) in a handshake with President Buhari

According to The Nation, Amosun made this known in Abeokuta shortly after attending a book launch put together to mark the one year anniversary of the death of renowned educationist, Lamidi Sofenwa.

If President Buhari and his administration had not come in time with rescue mission, only God knows where Nigeria would have been today.

On this 2019 for me, the only thing that can probably prevent Mr. President from contesting is ill -health because if not for this administration of President Muhammadu Buhari only God knows where Nigeria would have been today.

As humans, we quickly forget things. If we could be fair to this administration, they came in at a time the country was plunged into a very deep end and imagine where the country is today. We were in recession and now we are out of it and it not easy to get to this point.

Meanwhile, nobody will take the fact that from the three cardinal points he set for himself, this administration has been doing tremendously well in the area of security. We all know that nothing good can happen in any country without adequate security.

Yes, some people are saying Boko haram has not yet been conquered but if you look at America and put into consideration how many years it took them to win the war against Osama Bin Laden among others you will know that this administration should be applauded as far as security is concerned.

The same thing in our economy. Just look at our agriculture for instance, it has never been this good. At least I am a governor and this is my seventh year.  This is the first time that Nigeria is truly diversifying.

The statement is one of many reactions to women affairs minister Aisha Jummai Alhassan‘s prayer that Atiku Abubakar becomes president come 2019. Alhassan had stated this during a visit to Atiku during the Sallah holiday.

She later added that she will resign her position to support Atiku if Buhari joins the race against him in 2019.

“She is entitled to her opinion, but I would have saluted her if she had honourably resigned her appointment, because you cannot blow both hot and cold at the same time.

Yes, I would have saluted her if she had resigned but falling short of resigning has taken everything away from what she had said. Well, I am not Mr President and I know that at the appropriate time he will review things.

For somebody to have come out and say such thing means clearly she is even working against the government and she will not want that government to succeed, that is my own believe. I may be wrong but if I am in her shoes she should have done that and resigned.

I don’t think there is a sabotage in that government because she is just an individual and unfortunately am not from that region,so I won’t be able to say more than what she said. She should have followed it up with a resignation from that organisation,” Nigerian Tribune quoted Amosun as saying.