An Air Peace passenger @uberseun has said that the airline put chairs on the emergency aisle of the aircraft, adding that when him and others asked questions, they were then asked to “shut up and get out” if they weren’t comfortable with the explanation given.

He added that they were then taken to the police station and are being charged. 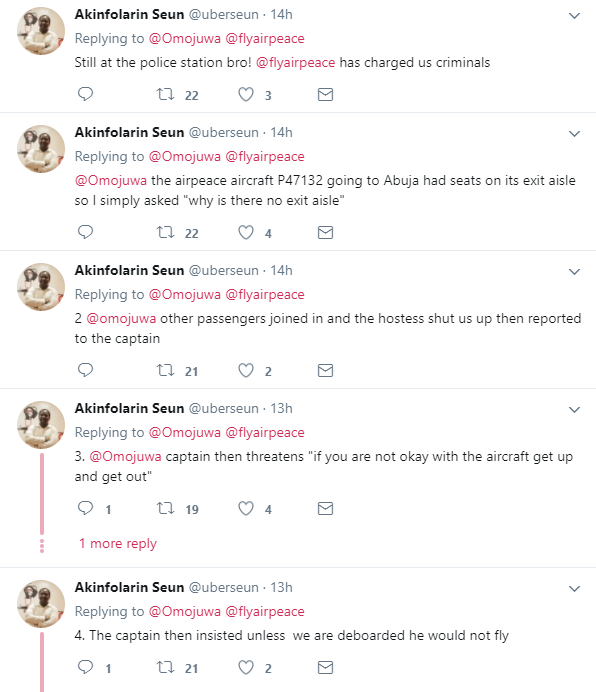 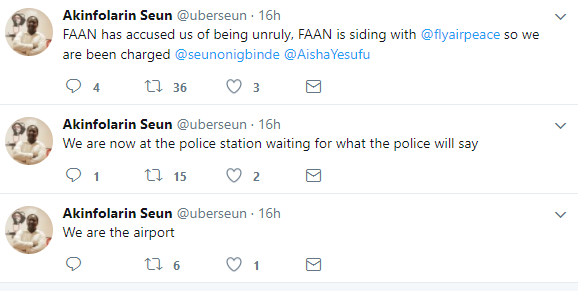 Another user @babajidefadoju, the head of digital communications of Oyo state government said they are being charged with breach of peace at an Ikeja magistrate court. 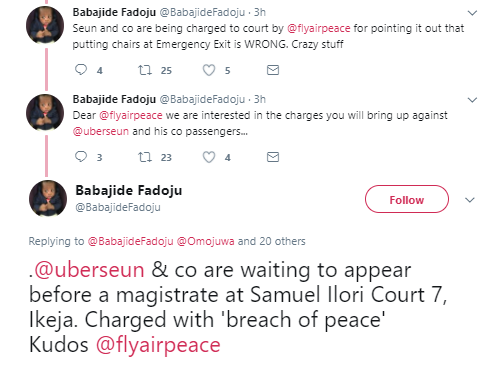 1. So here's what transpired on @flyairpeace with @uberseun a passenger on it.
Another passenger narrated the occurrence in this video pic.twitter.com/W98Tu5dAvt

The series of tweets led users to demand that people boycott the airline.

The airline has reacted to the tweets, with its own narration of what occurred. See below:

We wish to set the record straight on d incident involving 3 unruly passengers on our 18:30 Lagos-Abuja service on 11/09/17

During the safety briefing on the 18.30 Lagos-Abuja service, 3 passengers (two men and one woman), began to query the seat confirguration around the exit of the aircraft. Our crew’s explanation that the seating arrangement was approved by both FAAN and NCAA fell on deaf ears.

The passengers rather insisted that our engineers be brought on board speak on the aircraft’s airworthiness. At this point, the crew briefed the captain, who intervened by using the public address system to confirm that the seating arrangement was approved by both FAAN and NCAA. Notwithstanding the captain’s explanation, the passengers persisted.

The unruly passengers started spreading apprehension on the flight, saying the aircraft might crash like it happened with another local carrier.

All appeals to the passengers to allow the safety briefing continue were rebuffed. At this stage, other apprehensive passengers insisted that they would not fly with the three unruly passengers on board. The captain, therefore, had no choice than to ask the three passengers to get off the aircraft.

While three of the passengers refused to disembark as requested by the captain, the two men later disembarked after delaying the flight for over two and a half hours. The lady among them, however, persisted in her disruptive conduct. FAAN security personnel were then called in to intervene.

Despite the intervention of FAAN security, the lady refused to comply, boasting that she was prepared to make a lot of money from the airline. She, however, agreed to disembark after about a total of three hours delay. Given the disruptive behaviour of the passengers, FAAN security took them in for questioning.

The passengers were eventually handed over to the police for further questioning on their unlawful and disruptive conduct. While we will continue to treat all our esteemed guests with the greatest respect, we will allow a tiny minority of customers jeorpadise. We will not allow minority customers jeopardise the safety and comfort of our esteemed guests and the overall safe operation of safe operation of our flights.

There are civilised channels of communication open to dissatisfied customers, including visiting our offices to make their complaints and get them addressed. There are also regulatory authorities, including NCAA and FAAN customers may complain to if they feel aggrieved over any issue.

We wish to reassure our numerous esteemed guests that our flights remain absolutely safe and all our operations are approved by both domestic and international aviation authorities. We will continue to show all our valued guests the greatest respect and will never compromise on their safety.

The law enforcement are at the moment addressing the unruly conduct of the three passengers and should be supported by all to do their job without bias. Nobody, no matter their reach and contacts, should be encouraged to take the laws into their own hands.

Related Topics:Air Peace
Up Next

#HelpBenueToday! Do You have any Item for Benue Flood Victims? Call any of these Logistics Companies to Pick Up the items from Your Doorstep