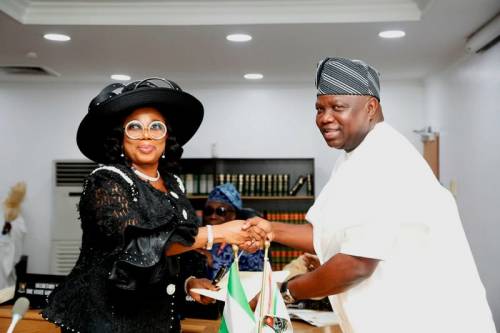 Gov. Akinwunmi Ambode of Lagos State on Friday urged the state judiciary to step up in the area of speedy delivery of justice, without compromising the fundamental principle of fair hearing and the rule of law.

Ambode made the call at the swearing-in ceremony of Justice Opeyemi Oke as the new Chief Judge of the state at the Lagos House, Ikeja.

Oke came into office following the exit of Justice Olufunmilayo Atilade, who attained the statutory retirement age of 65 on September 24th.

The new Chief Judge joined the State Judiciary as a Senior Magistrate on May 1, 1986 and was appointed a Judge of the High Court on July 17, 1996. She becomes the 6th female and 16th Chief Judge of Lagos State.

Governor Ambode congratulated Oke on her confirmation by the state lawmakers, describing it as a positive affirmation of her competence, experience and character to preside over the sacred temple of justice in Lagos State. He said:

I have absolute confidence in your intellectual capacity to steer the ship of the state judiciary on a smooth sail. One area of our judicial system which I consider as work in progress is the speed of justice delivery in the State. We have made significant progress in this regard with the various reforms that have been initiated and implemented, however, I believe strongly that we can do more by stepping up our efforts. I do understand that our judges are currently facing enormous work load due to the fact that the Lagos judiciary is the busiest in the country and this will naturally affect the turnover of cases in our courts. It is for this reason that I once again recommit our administration’s determination to seek a significant increase in the number of judges that we have on the Lagos bench.

Ambode said his administration planned to establish a designated Commercial Courthouse with the objective of ensuring speedy consideration of commercial matters:

There is no gainsaying that Lagos is the commercial nerve centre of the country and it deserves a modern state-of-the-art first class Commercial Courthouse to speedily address commercial disputes in the State. It is hoped that this courthouse will accommodate all commercial-related organs of the judiciary in order to drive commerce and improve the ease of doing business. Our administration will continue to cooperate with the judiciary in developing and implementing appropriate strategies to ensure justice is done speedily. I want to assure you of our commitment to do whatever is required of us to ensure that the on-going reform in the judicial sector achieves the desired effect.

In his remarks, Adeniji Kazeem, Attorney-General and Commissioner for Justice, said the event marked the beginning of a new dawn for the state judiciary.

According to him, it provides the direction for renewed vigour in the discharge of the highest standard of responsibility and the dispensation of justice in accordance with the rule of law and good conscience.

Oke, in her remark, pledged to make speedy dispensation of justice and zero tolerance for corruption the hallmark of the judiciary in the state.

She said that she would ensure an efficient, effective and transparent judiciary where there would be total confidence of the public in their ability to provide quick dispensation of justice.

The Chief Judge lamented the high number of old cases, saying that the total number of cases from five years upwards in the Lagos Judicial division could be estimated to be in the region of 4,000.

According to her, when cases drag for over five years and above, they constitute an embarrassment to the image of the judiciary. She said:

We need an urgent and immediate plan to clear the backlog of old cases. We, therefore, suggest a Backlog Elimination Programme to tackle the issue of backlogs and congestion. The task requires extra work, more efforts and resources, new hands, including judicial officers.

Oke said that information technology would be deployed to achieve an efficient and effective judiciary.

I’m calling on all and sundry to support and put our shoulders together and get the Lagos State judiciary moving at the fastest pace possible, without compromising on the virtues of love, equity and justice.