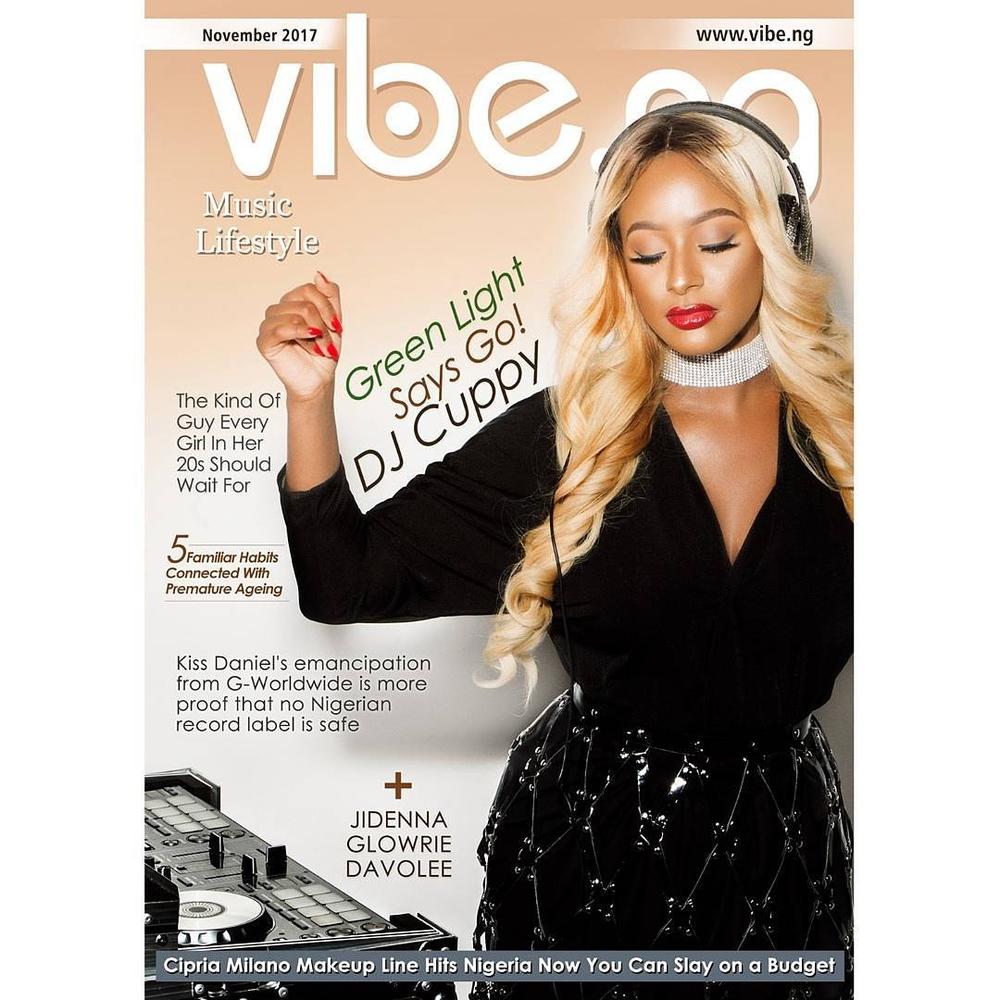 Being a daughter of a billionaire oil magnate definitely did not stop Ifeoluwa Florence Otedola also known as DJ Cuppy from creating a name and brand for herself.

The superstar disc jockey recently spoke about the dismay she feels when she is put in the shadow of her father and it raised quite a ruckus on social media.

As she cover the November edition of Vibe Magazine, she discusses how her family’s fame affects her, her new single with Tekno “Green Light” as well as the disc jockey profession in Nigeria.

On her family’s fame and how it affects her:

I would never ever apologize for what family I’m from and if anything, I can use my own opportunity to create more opportunities for others. I’m actually a hardworking young woman that has a passion for DJ-ing and that message has taken me a lot of years to come through. I’m still working on it, but I feel like, finally my work ethic is starting to speak for itself.

On her “Green Light” collaboration with Tekno:

“Green Light” is my original song. I came out to the market with a song called “I love my country” which was a remix, but “Green Light” is really me not hiding behind anyone’s record. Tekno and I wrote the song together, produced it, came up with it and I’m so proud of it. For me it’s such a breath of fresh air. Regardless of how well the song does- and it’s doing very well- I’m so proud that I decided to take a risk. I’m singing on it which is a new thing for me. I love the video, I just love everything about the song, Regardless of it being my song, it’s such a jam. I fall in love with it every time. Every time I hear it, I feel refreshed.

On working with Tekno:

On the disc jockey business in Nigeria:

I feel like DJs are completely underrated, but then having said that, DJs are now getting the recognition they deserve,after so many years of playing artistes’ music, supporting artistes and breaking their records. Now, us DJs are taking that limelight that we’ve worked so hard for. You know there’s people like uncle Jimmy Jatt who really started this idea of a DJ being a brand, not being hidden behind the scenes or in a corner in a room and there’s amazing people like Spinall now really taking that force. For me it’s really exciting. As a female, I feel like we can take that branding force to another level. I could not think of a better time. When you think about how big African fashion, films, music and creativity in general is now globally, I couldn’t think of a better time to be a female DJ from Nigeria.

On affluence getting in the way of love:

I feel like for me, it’s hard to say because I’ve grown up in an environment where I’ve looked at people because of their ambition not because of what they have. A lot of my friends are go- getters. We come from different backgrounds and it’s almost like I’m a bit of a disappointment in that sense because I don’t act like someone they expect me to act like. I’ve dated people that have grown up completely different from me but the thing they’ve always had in common is that they’ve been ambitious. They’ve had careers, they’ve had very serious goals. So I don’t think that affects anything.

We have our WINNERS! BellaNaijarians, Win TWO Tickets for You & a Friend to Attend Simi’s #SeeMeLive Headline Concert this Sunday!

The Kingdom of Kendrick! Check out the Rap Star’s Cover & Interview for Variety Magazine’s “Hitmakers” Issue