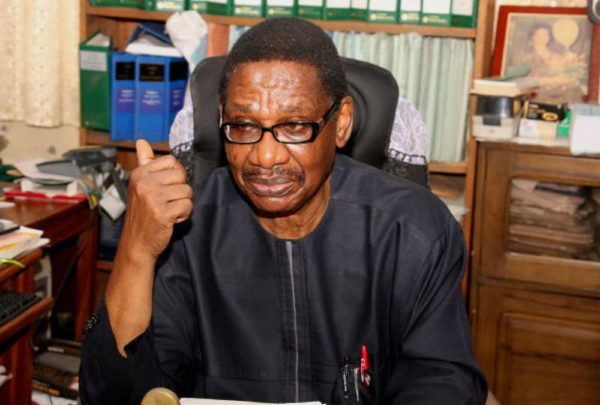 Professor Itse Sagay, chairman of the Presidential Advisory Committee Against Corruption, has said the whistleblower who alerted authorities on the stash of money recovered from an apartment in Ikoyi is not sufficiently stable to receive his reward.

Speaking to Punch, Sagay said the whistleblower is someone “who will almost run mental” when he receives the money, and will use it in an “irresponsible manner.” He said:

What I gathered from my inquiry is that the man is not sufficiently stable to receive such a huge sum of money. He is like someone who will almost run mental when he gets the money and will use it in an irresponsible manner, attracting not only undesirable people but even danger to himself.

I think what they wanted to do for him was to provide counsellors. Not just counsellors for character and mental situation but counsellors who would be like consultants that would help him to really invest the money and plan in such a way that he doesn’t throw it away in five minutes.

Sagay said what the government is trying to do is help the whistleblower by paying him in installments.

He added that he believes the whistleblower wants the money to “blow it all in five minutes.” He said:

It is better to pay him in tranches. I agree with the government because if not, he will throw it away. This is valuable money that government could have used for millions of unemployed and wretchedly poor people.

One man is getting it and he just wants it so that he can blow it all in five minutes? No, the government has a responsibility to see that his excitement does not end in seeing the money being thrown away irresponsibly. So, I agree with the government.

Finance minister Kemi Adeosun had in a statement through her special adviser on media and communications Oluyinka Akintunde on Monday said the whistleblower will be paid this month.

She said the whistleblower is among those whose payment is being processed for the November batch. Read the statement below:

The Honourable Minister wishes to state unequivocally that the Federal Government has not withheld any fund due to any whistleblower.

The ministry has in place detailed procedures for processing payments due under the whistleblower policy.

The procedures were designed to prevent abuse and legal disputes and to ensure protection of the information providers.

These procedures include an application by the agency who recovered the funds including evidence of the recovery, confirmation that there are no pending legal issues on the recovery, verification of the identity of the information provider, calculation of the amount payable and computation of relevant taxes.

It must be stated also that payments are made in monthly batches to ensure control and to protect the identity of information providers.

To date, over 20 of such persons have been paid. From available records, the payment due on Ikoyi is among those being processed in the November batch, which will be released within the current month.