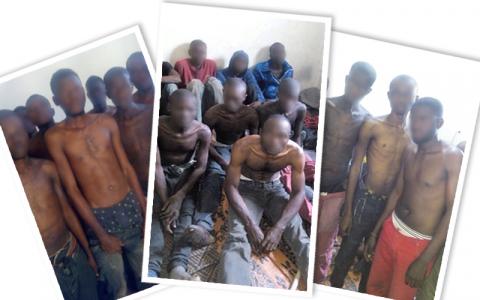 In Libya, a “slave market” is in operation, where “big strong boys for farm work” are being auctioned for $400, CNN is reporting.

The report corroborates an earlier statement released by International Organisation for Migration (IOM) in April this year. The IOM statement said that “IOM staff in Niger and Libya documented shocking events on North African migrant routes, which they have described as ‘slave markets’ tormenting hundreds of young African men bound for Libya.”

“The situation is dire,” Mohammed Abdiker, the director of operation and emergencies for IOM said, adding that “some reports are truly horrifying and the latest reports of ‘slave markets’ for migrants can be added to a long list of outrages.”

The statement added that “IOM Libya learned of other kidnapping cases, like those IOM Niger has knowledge of.”

Carrying concealed cameras, CNN’s reporters in Tripoli, the capital city of Libya, revealed that about “a dozen people” were auctioned “in the space of six or seven minutes”.

One of the traders, dressed in a camouflage gear and holding a man, said, “Does anybody need a digger? This is a digger, a big strong man, he’ll dig. What am I bid, what am I bid?”

The video evidence has been handed over to Libyan authorities who are currently carrying out a clampdown on smugglers.

An official with Libya’s Anti-Illegal Immigration Agency First Lieutenant Naser Hazam, told CNN that he has not witnessed a slave auction, but acknowledged that organized gangs are operating smuggling rings in the country.

Hazam said: “They fill a boat with 100 people, those people may or may not make it. (The smuggler) does not care as long as he gets the money, and the migrant may get to Europe or die at sea.”

As the crackdown on smugglers continue, it becomes more difficult for them to transfer the migrants to Europe, leaving them with thousands of persons who ultimately become slaves.

“The auctions take place in a seemingly normal town in Libya filled with people leading regular lives. Children play in the street; people go to work, talk to friends and cook dinners for their families,” CNN reports.

The migrants, when intercepted, are taking to detention camps, from where they would be deported to their various their countries.

Victory, 21, one of the migrants in the detention camps, who left his hometown in Edo state, Nigeria and spent more than N1 million and 16 months trying to reach Europe, said he was sold at a slave auction.

He could only get to Libya, he said, adding that him and other migrants were deprived of food, abused and mistreated by their captors.

“If you look at most of the people here, if you check your bodies, you see the marks. They are beaten, mutilated,” he said.

When his money rant out, his smugglers sold him as a day labourer, saying that the profit made from the transactions would serve to reduce his debt.

This didn’t happen, and after being forced to work for weeks, Victory was told the money he’d been bought for wasn’t enough. He was returned to his smugglers, who then sold him to more buyers.

The smugglers, he said, also demanded money from his family in Nigeria before they eventually released him. “My mother even went to a couple villages, borrowing money from different couriers to save my life,” Victory said.

“I could not make it (to Europe), but I thank God for the life of those that make it. I’m not happy. I go back and start back from square one. It’s very painful. Very painful,” Victory said.