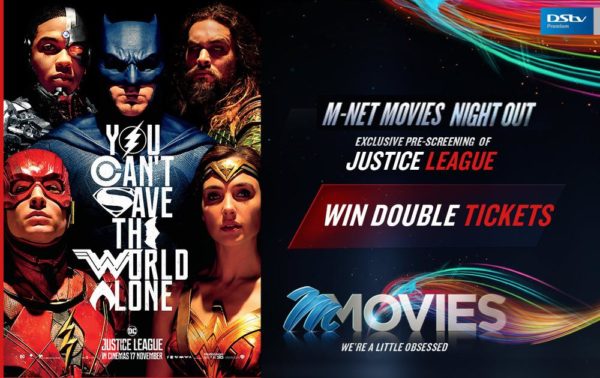 Calling all superhero fans! The time has come for our favourite DC superheroes to join forces to save the world. We have decided to bring you an exclusive pre-screening of Justice League with M-Net Movies Night Out and DStv. Stand a chance to be one of the first to see Justice League in cinemas and prepare yourself for a night of high-packed action and adventure.

You can win a pair of tickets to this exclusive pre-screening by simply following @DStvNigeria on Instagram, repost the Justice League poster on the page and tag a friend you want to come with to the cinema. It’s that easy. You can also join the trivia and competition on the DStv social media pages to win.

Fueled by his restored faith in humanity and inspired by Superman’s selfless act, Bruce Wayne enlists the help of his newfound ally, Diana Prince, to face an even greater enemy.  Together, Batman and Wonder Woman work quickly to find and recruit a team of metahumans to stand against a newly awakened threat. But despite the formation of this unprecedented league of heroes—Batman, Wonder Woman, Aquaman, Cyborg and The Flash—it may already be too late to save the planet from an assault of catastrophic proportions.

So, whether you’re team Superman or team Wonder Woman, be one of the first to see Justice League with M-Net Movies Night Out. Winners will be selected on a random basis and will be notified on social media and via e-mail confirmation.