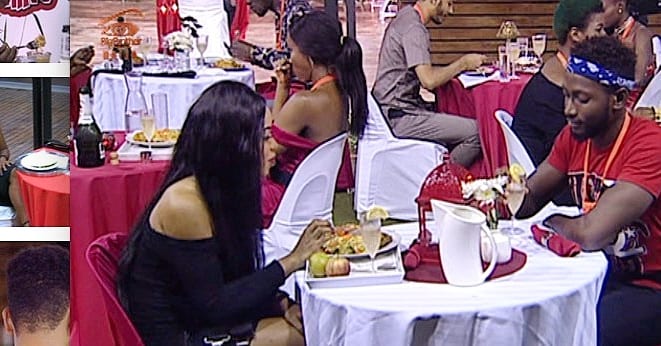 Did you watch day 17 of the Big Brother Naija 3 reality show?

Bonded and Washed up

There wasn’t much action in the House until Biggie pulled yet another rabbit out of his bottomless hat and had the Housemates switched and paired up again. He called it ‘the season of love’.

The Housemates were given a strict rule of engagement. They were to avoid conversing with Housemates either than their bonded pairs. This at the begging seemed an impossible Task but the Housemates got so submerged that they eventually dissolved the rule and started cross-conversing.

The most interesting of the bonded pairs were Lolu and Cee-C. There seemed to be dark clouds of personal vendettas hanging over the two and the moment couldn’t be more opportune. The pair stayed up until the early hours of the morning conversing mostly about Cee-C’s love interest in the House, Tobi. Even though she was beating around the bush for a while, Lolu finally cracked the nut and she confessed that she did really like Tobi ‘a lot’.

BamBam and Tobi seemed too close for comfort because judging by the way BamBam seemed so attached to Teddy A, One would assume she’d be miserable without her bae but, she certainly seems comfortable on Tobi’s lap.

During the Diary sessions, the Housemates revealed why they had nominated other pairs and who they’d eliminate with immediate effect had they been handed the opportunity.

Big Brother must have grown tired of the Housemates’ clear disregard for his rules. He summoned all the pairs except Bambam, Tobi, Khloe and Anto onto the centre of the garden and had them showered back to obedience, if any ever existed. The Housemates weren’t impressed, some even close to tears but the mood was eventually restored. While most Housemates slept, Lolu and Cee-C carried on with their gist and by the look of things, the pairs aren’t missing each other.

When Biggie first paired the Housemates, it was clear that some of them became very comfortable in their couples, now that things have been shaken up, a whole new dynamic is developing in the House.

Tobi and Cee-C caused quite a stir when they were paired together which gave the other Housemates much to gossip about. They were always attached at the hip and did not spend time with many of the other Housemates. Biggie’s reshuffling saw Cee-C paired with Lolu and this seems to of caused some separation anxiety. Last night was a wild one for both Tobi and Cee-C, she finally admitted to liking Tobi but then afterward could be hear chatting to Lolu, telling him how she desperately misses her boyfriend outside the House. With mixed messages in tow, Tobi spent the whole night tossing and turning.

It is evident at this point that Tobi, Cee-C and Lolu are all struggling with the reshuffling the most out of everyone. While many of the other Housemates have taken the new bonding exercise in their stride, Lolu is looking a little lost without Anto, and Cee-C and Tobi clearly don’t like being apart.

We all loved watching the rocky romance between BamBam and Teddy A, for a while it seemed they were almost exclusive and then in a flash. Wham Bam, Thank you maam! Both Teddy A and BamBam were on to new things last night. Alex and Teddy A are really enjoying their time together and even though Tobi may be reeling, BamBam doesn’t seem bothered at all. Last night she looked perfectly content sitting on Tobi’s lap.

These Housemates have been all-talk and no-action. They have discussed at length the possibility of putting on entertainment shows for the audience but we had not seen any shows until Biggie gave his decree. He told the 24-hour pairs to each put on a show for him, all except for Lolu and Cee-C, who are in the dog box.

First to the stage was Dee-One and Miracle who had the Housemates in stitches with their game tiko-tiko. Bambam and Tobi put on a musical drama for the Housemates and the camera-men came to the table as they kept showing us Cee-C.

Cee-C did not seem impressed to see her man with another woman, she will blame it on her eyesight but we know the truth. She has on many occasions denounced her relationship with Tobi, but if looks could kill, Bambam would be gone. Cee-C is the the perfect example that absence really does make the heart grow fonder. Our advice to Cee-C is that she should not fight cupid’s arrow and she should go get her man.

Teddy A sang and rapped while Alex tried to sing. The voice gods may have failed her but her spirit to do her best and entertain Biggie makes us give her an A+ for the presentation. The great camera-men kept showing us BamBam who looked forlorn. We thought that after bonding with Tobi that she may be over Teddy A, but it seems as though what they have can stand the test of 24-hour separation.

Is love in the air?

The talented Bitto and Ifu Ennada put on a sexy singing and acting presentation. Ifu Ennada has on many occasion commented on Bitto’s manhood and yesterday they were kissing all over the House. Could it be that something is brewing in “Bifu” land? These two are great performers so it could all be an act but it being the month of love, we hope they are not playing with our hearts.

Nina sang All of Me to K.Brule while Miracle looked at her longingly. For the second part of their presentation K.Brule impersonated the Housemates and got a standing ovation. It was heart-warming to see K.Brule happy. We love this side of him and hope his jumping days are over.

Chocolate Angel and caramel Rico Swavey looked like a dessert advert as they serenaded the Housemates with their cool sound. Ahneeka and Leo looked like the epitome of a power couple as they prepared for their hip-hop musical presentation.

Princess and Vandora admitted that they bonded over silliness which was evidenced in their hilarious presentation of Housemate impersonations. The silly pair had the House in stitches. This “girl-mance” is really beautiful and we are happy that they found each other and we hope that the claws don’t come out and ruin it.

The last group was none other than HoH Khloe and Anto as they gave the guys a memorable show in their bra-lettes and short skirts. Don’t you think they looked like the Nigerian version of Beyonce and Nicki Minaj in the Feelin Myself music video?

Thank you Biggie for making them entertain us, who was your favourite 24-hour pair?

Biggie released the Housemates from the harnesses that tied them together so they could better celebrate Valentine’s Day. When Head of House Khloe read his instructions for them to return to their original pairing, the news was welcome with great applause and broad smiles.

Everyone jumped for joy at this development. Everyone except Lolu and Cee-C who were still bound together. Earlier in the day there was some major friction as the rope that bound them snapped and hit Lolu, who was accidentally hit in the groin and had been limping since. As Khloe read further that Lolu and Cee-C must continue to use this opportunity to appreciate their differences and the importance of tolerance. Biggie wanted Housemates to embody Nigeria’s values of Unity, Peace and Progress. Judging by the frown on her face and the weezy breath, Cee-C was not amused, especially as this meant that Tobi and Anto who she deeply distrust would now form a pair.

Head of House Khloe giggled even more as she continued to read Biggie’s instructions that tasked all the guys to cook up a storm for their female pairs, and not just any type of meal, one worthy of Valentine’s Day that is a creative, love-tasting dish. The girls on the other hand were tasked with looking their best for their special partner, and bring their most glamorous self for an al fresco romantic dinner under the stars.

Once the pantry was emptied, Tobi gently pushed Cee-C into the storage room and they shared a long, gluttonous kiss, unaware that Lolu was still in the back of the room. Embarrassed, Lolu took a dig at them that the last time he did it was in high school. Cebi had no need for words as their chemistry filled the screen.

Have you been watching? What did you think of the Day 17 activities?