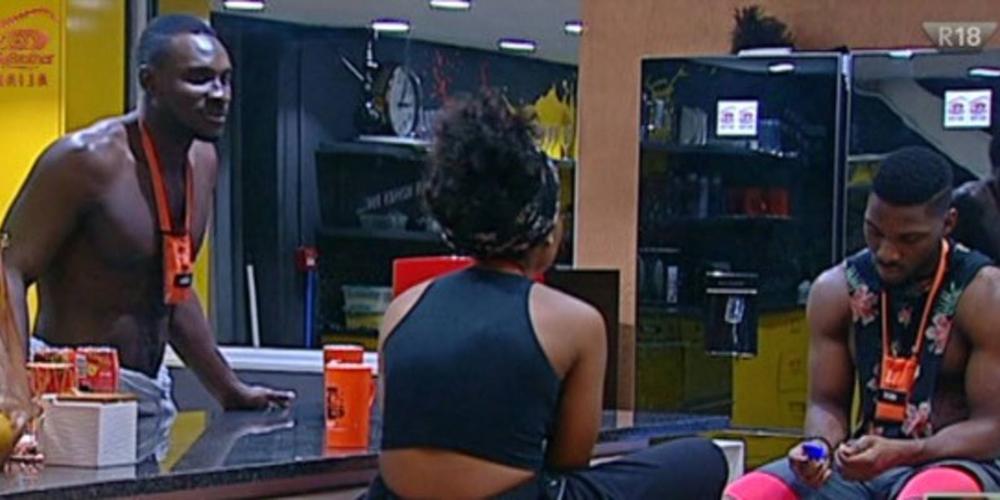 Did you watch day 24 of the Big Brother Naija 3 reality show?

The babies in the House got the Housemates bringing their parental skills to life. Biggie made sure they enjoyed the bittersweet midnight pleasures of having children. When the babies cried, the Housemates had no choice be to attend  to them in the wee hours of the morning. However, that seemed to come naturally from the Housemates as none of them resisted attending to the babies’ needs.

Soon as the babies settled and went back to sleep, Cee-C, Tobi and Angel weren’t about going to bed anytime soon. They enjoyed a friendly chat amongst fellow Housemates. As interesting as it was, one couldn’t help but notice that there wasn’t any eye contact between Tobi and Cee-C.

Eventually when they did to seem to be happily engaging, the curve balls thrown  by Tobi and Angel got Cee-C to somehow change her conversational strategy.

At some point Tobi pointed out that he wouldn’t associate himself with a woman that he thinks is a liability intellectually, financially and otherwise.

It is pretty clear that had Angel not been part of the conversation, Cee-C would have loved to have a one on one with Tobi who now made it clear that the distance between them is more visible than ever. She decided to change the chat and focus it on a man she says is her ‘friend’ on the outside, Dee Dee.

As if that would make Tobi envious, it didn’t. Instead he encouraged her to pursue things with him [Dee Dee] as it’s clear that the guy was into her.

The humble Cee-C went to sleep without being able to chat to Tobi alone. However, she did ask for a massage today, we’ll see if she gets one or not.

The Baby saga has certainly raised more than just the amount of noise in the House. The Housemates are definitely heeding the hidden messages and issues surrounding raising kids in different family dynamics.

Anto has had a peculiar way of embracing the responsibility Big Brother has given them. Although initially depicted as a burden, she has highlighted a couple of social challenges facing women in societies were they’re expected to conceive without the psychological preparation. During her conversation with Ahneeka, the two spoke about the disadvantages of the societal expectations that result in woman having children solely based on the fact that they’ve reached child bearing age.

Who Pitches in More?

On the other hand, Cee-C agreed that men these days aren’t very tolerant of women who display high levels of independence. She also mentioned how a man once told her that he wouldn’t marry her because of how she carried herself, viewing her independence as a defect. However, the men begged to differ, mentioning that independence is an attractive trait and instead of pushing them away, such an attitude actually pulls them in. Tobi further elaborated, discrediting Anto’s theory that men in Nigeria promoted dependence; he mentioned how his father took care of the main financial elements of the Household and has never heard his mother asking for petty things that she could have taken care of. Basically agreeing that taking care of a Household, be it financial or otherwise, is a dual responsibility.

The Baby task is definitely putting the two-dimension perspectives into a gender neutral opinion. Both the guys and the girls seem to be adapting and equally taking responsibility, with no signs of over burdening their partners, although Miracle has been nursing his former Household and paying a little less attention on the task at hand, but this is a different gist altogether. Has Biggie achieved balanced responsibility scales in the House?

A week ago, one could have sworn that Cee-C had Tobi by an unbreakable leash but now, It seems like the two former love birds have switched roles and it’s completely out of control. At least the shade is.

Talking of shade, Last night between the babies’ uncontrollable  wailing and deep sighs let out by these inexperienced parents, Angel, Tobi and Cee-C were gisting about a couple of nothings and based on their body language, the former constituents of ‘Cebi’ were utterly uncomfortable. Angel just had to add salt and pepper to the wound by ramping onto the relationship highway. Tobi then increased the volume and mentioned how when stuck in the hype of courting a girl, “I’m sorry” was probably the magic phrase when dealing with a problem; to which Cee-C shyly agreed.

More shade was thrown during the parenting conversation they all had out in the porch. It was clear that this gist was a tool for the both of them to exchange occult messages without giving anything away; with Cee-C talking about how important it is that a man gets to know her before rushing into a relationship and how her independence has served as a sift because most men cannot handle this so called defect of hers.  To clap back, Tobi brought out his guns and mentioned how important it as for beauty to be accompanied by character to which Cee-C laughingly commented “We women can see through a man that just wants sex”. This was a hard blow because while speaking to Miracle, Tobi did mention that Cee-C was making it seem like he’s after her goodies; referring to a t-shirt incident they had one night.

Basically, these veterans were having a full on conversation while dodging any direct contact or reference; but we must mention how civil they’ve been towards each other. Whether on pretentious grounds or genuine effort, the whole thing was awkward even for us. Cee-C is most likely trying to get back into Tobi’s good books while he’s literally holding an invincible sign written “Look what you’ve lost and you ain’t getting it back“. We’re wondering if they’ll ever lock lips or share a bed again.

The woes of parenthood are being felt in the House this week but Biggie has come down on the guys, telling them that they will have to pamper the ladies in the House.

Even though all the Housemates have been trying their best this week with the Task of responsibility and parenthood some of the guys have definitely been slacking. During the Diary Sessions many of the Housemates said that Tobi, Miracle and Rico Swavey were not as into it as the others. It was evident that Rico Swavey was not exactly glowing in the Diary Room and said it is difficult to see the baby dolls as real children.

Earlier this evening, Biggie’s voiced boomed through the House and informed the House that all the guys will have to pamper the ladies until further notice. This mean that it is time for them to step up and make them feel like Queens. All the ladies of the House have been working hard to win the Wager, especially Ahneeka and Alex who were positively shining in their Diary Sessions.

Rising to the Challenge

Leo, Angel and Teddy A have really risen to the occasion in terms of fatherhood. They could all be seen today taking full charge of their responsibility and barely leaving their babies unattended. Ahneeka even went so far as to say that Angel is doing a better job than her. Teddy A says the Task just feels so natural to him as he is a father outside the House and it is bringing back memories for him. This Task has brought about a range of emotions for all the Housemates and gotten everyone talking about socially conscious issues, it has given rise to the reality of actually having children in real life. Anto for example did not take to the Task well in the beginning but is now really starting to get into it.

It all started earlier this evening during the Diary Sessions when Biggie gave BamBam a Secret Task that would have a huge effect on their Wager.

Biggie used the Diary sessions to ask all the Housemates about their parenting experiences but when BamBam entered he added some spice to the mix. Her Secret Task was to steal one of the other Housemate’s babies and hide it so that it could not be found. Biggie told her that this would have a big impact on the Wager and that she must not fail. Even though BamBam was extremely nervous at the premise, fail she did not.

All was calm and well in the House until the cries rang out and everyone sprang to attention, it was only then that Anto and Miracle noticed that one of their three babies has gone missing. They jumped into action fast and searched the entire House. Anto pleaded with Biggie even stated that she knew they had been neglectful. It did not matter at all and Miracle tried to go to the Diary Room sheepishly but with no success.

After freaking out and combing through the House, it was only natural that the accusing would start. In a bizarre turn, Miracle confronted Alex of all people and asked her to stare him in the eye and tell him that she didn’t take his baby girl. She of course denied the allegations and was utterly offended at the prospect.

Have you been watching? What did you think of the Day 24 activities?