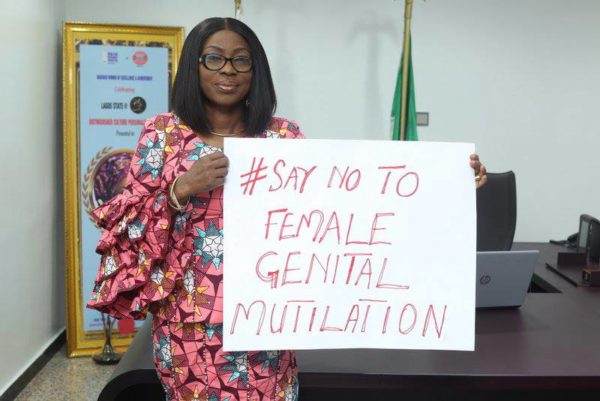 The Lagos state first lady Bolanle Ambode has expressed optimism that Female Genital Mutilation could be stamped out of Africa by 2030.

To mark the International Day of Zero Tolerance for Female Genital Mutilation (FGM), the first lady described the act as an extreme form of discrimination against women and girls.

Ambode called for citizens to continue to raise awareness to ensure the act is totally eradicated by 2030.

She blamed the continuation of FGM on the slow penetration of awareness of its health implication. She said:

The pace of penetration of awareness seems slow because the practice is an ancient one, deeply rooted in our various cultures but that does not make our efforts fruitless. Though progress may be slow, we are going somewhere as rural women, mothers and young girls, are becoming aware of the severe health implications of the barbaric practice.

A few years ago, many women, even some educated ones, saw it as a normal and socially acceptable practice but the story is fast changing, as awareness is getting mileage and rural women are now campaigning against it.

Ambode also urged governments to enact direct legislation to fight FGM, as is the case with some other anti-female practices.