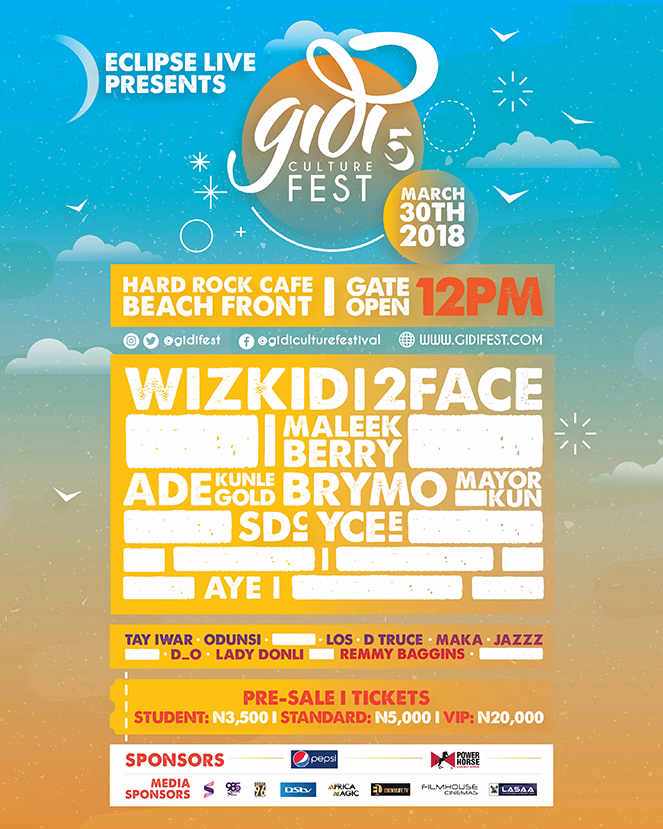 The Gidi Culture Festival has announced its 2018 line-up. It will be taking place at Hard Rock Café beachfront on Good Friday, 30th March and headlined by Wizkid and 2Baba.

They will be flanked by a carefully curated and diverse lineup of the some of the most sort after Nigerian acts making waves across the globe, Maleek Berry, Ycee, Adekunle Gold, Brymo, Show Dem Camp and Mayorkun.

This year, the organisers are introducing a second stage that will raise the next generation of very talented artists that are moving the underground and redefining the Nigerian sound. The new wave will be represented by D-Truce, Maka, Remmy Baggins, Lady Donli, D-O, CHYN, Jinmi Abduls, and Jamal Swiss.

The festival has in previous years featured African and international acts and this year will be no different, so stay tuned for the second announcement that will fortify the Gidi Culture Festival as one of the most progressive music festivals on the continent that has set out to empower the youth and bridge the gap on and off the continent.

Gidi Fest originated in Lagos in 2014, moving between various sites before settling in its current home, Hard Rock Café beachfront, at Landmark Village, Oniru, where it will attract approximately 10,000 people over 2 days.