The Women Breaking Barriers as First Female Coders in Afghanistan 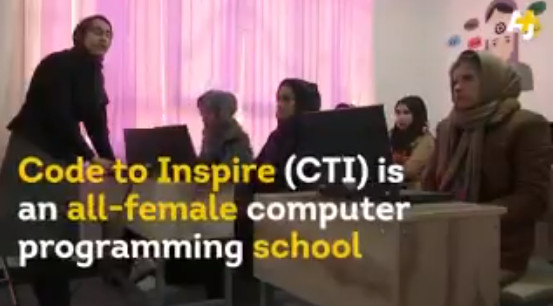 A group of young Afghanistan women in the western province of Herat are breaking barriers, becoming the country’s first female coders.

They are being trained at Code to Inspire (CTI), a girls-only computer programming school where they learn how to develop websites, build mobile apps, and video games.

CTI project manager Hassib Rassa says the programme is aimed at empowering women to so that they can attain financial security, adding that the programme hopes to expand and reach more people.

One of the women, Khatera Mohammadi, 20 created a video game “Fight Against Opium” to bring attention to the prevalent issue of drug trafficking in the region.

In the game, an Afghan soldier goes to Helmand to clear it of drugs. The soldier faces problems in the process: enemies hiding in tall corn fields, land mines, drug traffickers and hidden heroin laboratories.