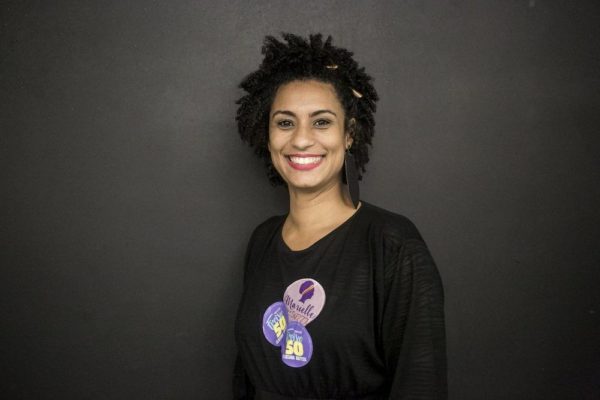 Activist Marielle Franco, who fought for the rights of Afro-Brazilians, LGBT people, and women, was 2 weeks ago shot 4 times in the head.

Franco, a 38-year-old gay black woman, had before her death, been a tireless activist against police violence, and had regularly spoken up for the poor.

She had been on her way back from a gathering of young black activists when the 9 bullets were fired into the car she was riding in and killed her and her driver Anderson Pedro Gomes.

39 prominent people, made up of activists, journalists, writers, actors, including Nigerians Chimamanda Ngozi Adichie and Ayo Obe, have called for an independent investigation into her killing.

See the statement below, as published by Guardian.

Last week one of Brazil’s most courageous social leaders was brutally assassinated on the streets of Rio de Janeiro. Marielle Franco, a city councilwoman and human rights defender, was shot four times in the head by unknown assailants in a passing vehicle shortly after leaving a gathering of young black activists. Her driver, Anderson Pedro Gomes, was also killed.

Long before being elected to Rio’s city council in 2016, Marielle was widely known as a tireless and fearless advocate for the rights of Afro-Brazilians, LGBT people, women and low-income communities. A gay black woman born and raised in one of Rio’s poorest neighbourhoods, she campaigned relentlessly against spiralling police violence in the city’s favelas.

Marielle’s activism earned her many powerful enemies. She vehemently challenged the impunity surrounding extrajudicial killings of black youth by security forces and, two days before her death, had denounced the police’s role in the killing of a young black man named Matheus Melo. She was a leading critic of the military intervention in Rio de Janeiro and was the head of a city commission tasked with monitoring the intervention.

We are deeply concerned and shocked by this commando-style killing of a woman who was a voice for the voiceless and a symbol of resistance to state-perpetrated violence, militarisation and anti-democratic forces. Given that Marielle’s murder bears all the hallmarks of a targeted assassination, we call for the creation of an independent commission comprised of prominent and respected national and international human rights and legal experts and tasked with carrying out an independent investigation of the murder of Marielle Franco with the full cooperation of state judicial and police authorities.