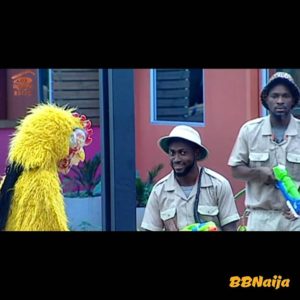 Did you watch day 45 of the Big Brother Naija 3 reality show?

With the Nokia Task in full swing and the hunger games pressing on, the Housemates have a mountain to endure and although there seems to be an air of ease, tempers are boiling and we’re yet to the Housemates steaming.

Tobi and Cee-C spent most of the evening after the Diary sessions chilling together, Tobi was highly perturbed that he has not had a Diary session. This could be the reason why he was so agitated and seemed to care very  little about what Cee-C had to say about them not being on speaking terms. True to the usual, good ol’ Cee-C pressed onto the issue by asking Tobi how he was in general and he warmed up slightly, confronting her about her somewhat flirtatious behaviour with Rico Swavey. His jealousy was as clear as day. His mood remained in the down low though; the price paid when Biggie’s rules aren’t followed we guess.

After Diary sessions were over, all the Housemates spent the rest of evening preparing for their Nokia Task and trying to come up with sound concepts. This helped Alex get her mind off of Leo and both Rico Swavey and the alcohol definitely helped lighten her mood as he seems to have taken it upon himself to tuck her in, slowly trying to fill Leo’s shoes, maybe. Thanks to the liquid courage, the general mood in the House was as feather light.

The rest of the night saw many of the resident couples getting close and cute. From BamBam and Teddy A cuddling in early as well as the on again off again Lolu and Anto doing the most. Miracle and Nina were as loved up as usual; ‘couch potatoeing’, sharing drinks and giggling endlessly. Exhaustion took a hold of all of them and just like that, the House went silent.

The morning brought very little to no drama but we’re certain of the internal wars waged by their inner lazies against their more sensible and health conscious sides. As per usual, they dragged their feet to the Arena where they stretched it out, clearly out of it. The post-workout conversation varied from the Task to their lives outside the House and back again. While some Housemates tried to eliminate the ‘poverty’ stench by inventing soup dishes and working the pot for the last of the stew, the others snoozed the morning away.

The Big Brother House isn’t just timber, bricks, cement and cameras; we wouldn’t blame anyone for assuming that it was built on a foundation of emotion, plastered with drama and powered by romance because the Housemates go through the most drastic of changes, fuelled by the most hectic of emotions. However, Big Brother seems to always know just what to say in order to trigger the desired reactions. He isn’t referred to as the ‘all seeing’ for nothing.

Like an actual Big Brother that acts as mediator between unruly siblings, a defender in the parent VS child court, emotional anchor to loved ones dealing with lost love and voice of reason when there seems to be a lack of clear judgement; Big Brother has been able to play those roles and much more. Many attribute Nina’s ability to open up and shed a few tears to her pairing with Teddy A, well, we beg to differ. Biggie has slowly elevated Nina’s spirits and directly contributed to her new found confidence. Looking back, he was able to trigger Dee-One‘s emotional breakdown sourced from the loss of his mentor, Vandora’s ‘sobathon’ fuelled by being overwhelmed and missing her family as well as Ifu Ennada’s emotional break down, caused by her loneliness and how perpendicular she was while the other Housemates remained parallel.

If the Diary was a kingdom, Biggie would be a god because referring to him as king in this context would be a complete understatement. The Oga always manages to get exactly what he wants out of the Housemates, be it a smile or tears. We’ve had a couple of instances where the Housemates carried their sorrows and frustrations into the diary room and came out looking and feeling rather light-hearted.  Although one of the most important elements of the House, the Diary Room has a life of its own, with an energy so contagious that the Housemates can’t help but match up and exude their own; sometimes over-done due to the fact that they’re almost constantly engaged in ego wars with other Housemates spotting equally overbearing personalities.

Following with the theme of frivolity this week, Biggie had the Housemates play a riddle contest followed by the Nokia Task brief.

What is life without a little fun? Previous weeks have resulted in the Housemates bringing out their more serious side so it was refreshing to see everyone letting loose and having a good time today with the animal costumes. On the heels of this animated afternoon, the Housemates were then instructed to play a game whereby one of them would ask another a simple yet complex riddle, if the Housemate in question got the answer wrong, they received a cream pie smack bam in the face! It was all laughs, smiles and hysteria until Lolu creamed Alex in the face with a lot of passive aggression. Needless to say she was not impressed and looked as though she was on the brink of tears.

After the Housemates washed up and goofed around outside, it was time for them to embrace a new, fresh Task, one that would play on many of the Housemates inner artist. How bewildering that the Housemates will have to film one another while being filmed in the House. Each Team had to pick a theme and then write a script, shoot the short film on their Nokia phones and then use the functions to best edit their mini production. This has proved to be dramatic as Nina donned a elderly mother’s costume and BamBam threw copious amounts of eye drops in to make her tearful scene hyper-realistic.

Clash of the Egos

Even though all of the above is meant to spark jest among the Housemates, it is definitely not all fun and games. Cee-C got visibly irritated with BamBam, to a point where she vented all her frustrations out to Tobi – He advised her on how to play on BamBam’s psychology in order to solidify success. Miracle also got extremely frustrated with Nina during their rehearsal and Lolu seemed to be on edge with Alex.

Have you been watching? What did you think of the Day 45 activities?