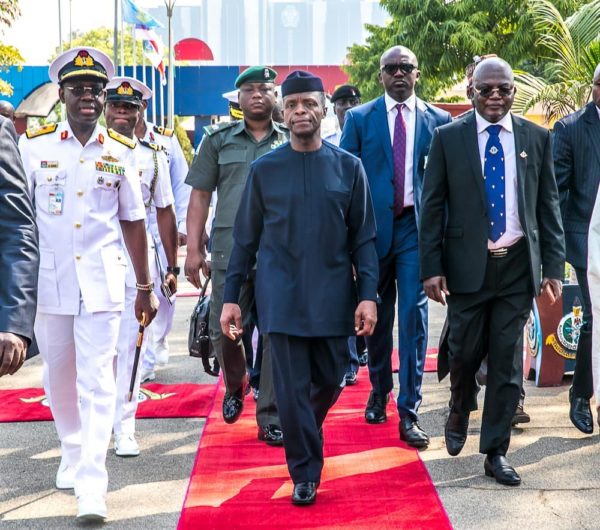 Vice President Yemi Osinbajo has said terrorist organisation Boko Haram can no longer be described as a serious fighting force, The Cable reports.

Speaking at the 8th edition of the 2018 National Security Seminar hosted in Abuja by the Alumni Association of the National Defence College (AABDEC), Osinbajo said Boko Haram’s recent attacks do not mean Nigeria is fighting “an unwinnable war.”

According to the Global Terrorism Index, terrorism deaths reduced 80% between 2015 and 2016, he revealed. He said:

They (Boko Haram) will alter their goals and objectives at random, and are capable of doing anything and everything to continue feeding off the oxygen of media attention.

Yet this should not be interpreted as meaning that we fighting an unwinnable war. We can boldly say that today Boko Haram is no longer a serious fighting force.

We have to be strategic in our approach, responding not out of panic or fear, but out of a determination to secure our nation and keep our people safe not only from terrorism but from every other threat they face. We must fight them on multiple fronts, starve them of funding and resources, of sympathisers, and of the oxygen of publicity, especially on the Internet.

Two weeks ago one such incident took place, in the town of Dapchi, in Yobe state. Suspected Boko Haram terrorists attacked a girls’ secondary school, abducting 110 girls. And then last week, the attacks on a humanitarian camp in Rann in Borno state,” he said.

Both incidents have received widespread condemnation from around the world. They are reminders of the absolute ruthlessness of the enemy – and the fact that it will resort to increasingly desperate and callous moves on our most vulnerable people and places, even as its losses mount.Very often, the campaign of violence is foiled, thankfully.

Towards the end of 2017, the Global Terrorism Index reported that terrorism deaths in Nigeria fell by 80 percent between 2015 and 2016. That figure of 80 percent represents countless Boko Haram attacks prevented from happening by the efforts of the Nigerian military. We must never forget that.

Frustratingly, however, all that a terrorist group requires to be deemed extraordinary is for it to record a high-profile success every now and then.

Want to Bring your A-Game to See the World Cup Trophy? Check Out these Outfit Ideas