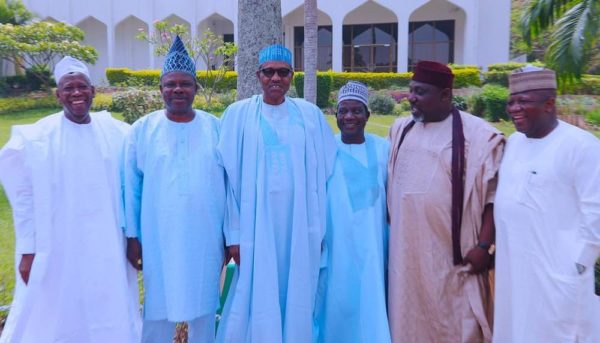 Governors with the All Progressives Congress (APC) have agreed to back President Muhammadu Buhari and reject the planned extension of the tenure of the leader of the party’s National Working Committee (NWC), John Odigie-Oyegun, Punch reports.

Buhari had kicked against the elongation of Oyegun’s tenure as planned by the party.

The 24 governors had on Tuesday met with Buhari, a meeting which was reported to have ended in a deadlock.

After a second meeting on Wednesday, the governors told the press that they have reached an agreement on not extending Oyegun’s tenure.

Abdualazeez Yari, the Zamfara State governor, speaking to newsmen said the governors are all on the same page.

The party will conduct elections at all levels, he said. The governors will meet with the working committee to come up with a timetable for the elections, he added.

We consulted and all the 24 governors of the APC are on the same page with Mr. President that we are going to respect our party’s constitution, and respect the constitution of the Federal Republic of Nigeria.

Therefore, we collectively agreed that we will have congresses at all levels – Local – State and National.

The committee set up by the National Secretariat of our party headed by governor of Plateau State, is presenting its report later today (Wednesday). The governors are also meeting with the working committee today so that we come up with convention committee names as well as timetable of the election.

So, there is no deadlock in our meeting, we have progressed and very soon you will have the names of the convention committee members as well as the timetable.

It’s Official! Jaaruma is Nigeria’s most successful & highest paid Sex Therapist as she shows off her 30,000 euros per night Ciragan Suite