Obasanjo and PDP have "resolved to join forces to rescue Nigeria," Party says 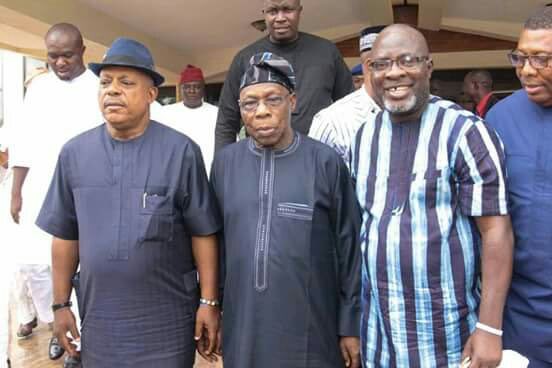 The PDP shared the news on their Twitter, revealing that the leadership of the party, led by Uche Secondus sat with Obasanjo in a 2-hour meeting at his Hilltop residence in Abeokuta on Saturday.

The party and Obasanjo, they revealed, have decided to “join forces to rescue Nigeria.”

They are joining forces with other “well-meaning leaders in the country to stop the nation’s current drift into anarchy.”

The leadership of the Peoples Democratic Party (PDP) and former President of Nigeria, Chief Olusegun Obasanjo rose from a two-hour meeting and resolved to join forces to rescue our nation from her current misrule. @MBuhari @APCNigeria

Led by the party’s National Chairman, @UcheSecondus, the PDP leadership comprising of members of the National Working Committee and leaders of the PDP Board of Trustees (BOT) met with Chief Obasanjo in his Abeokuta Hilltop residence on Saturday.

During the meeting, the leaders agreed that mistakes were made in the past for which the leadership of the PDP tendered apologies to the former President, Chief Olusegun Obasanjo, GCFR.

he former President, who received the apology with a Yoruba proverb that one does not hand over his child’s waist band to an enemy just because the band did not fit the child’s waist, further expressed his preparedness to fight for the course of nationhood.