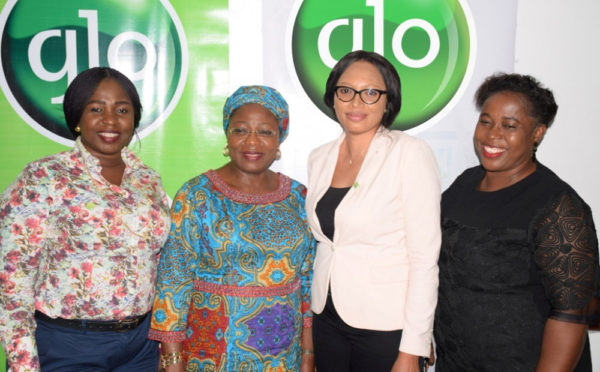 Temitope Oke of Globacom; Former Deputy Governor of Lagos State, Princess Adebisi Sosan, Justina Abdulateef also of Globacom, and the Convener of the forum and Publisher of e-Business Life magazine, Ufuoma Emuophedaro, at the 2018 International Day of the Girl Child sponsored by the telecom operator in Lagos.

Digital Transformation Leader, Globacom, has collaborated with foremost specialized ICT magazine, eBusiness Life, to commemorate this year’s edition of the International Day of the Girl Child. Globacom threw its weight behind the magazine to hold an interactive capacity-building session for pupils of select secondary schools in Lagos.

This, according to a statement from Globacom, is consistent with the company’s commitment to promoting women empowerment and capacity building, especially in the area of ICT. Globacom said this is aimed at equipping the womenfolk with the awareness, skills, and knowledge required for them to be active players in the fast-evolving digital economy.

Speaking at the occasion, an accomplished educationist and former Deputy Governor of Lagos State, Princess Adebisi Sosan, commended Globacom for supporting the initiative, which was held at the Landmark Event Centre in Lagos on Thursday. Princess Sosan described Globacom as a corporate citizen worthy of emulation for choosing to contribute to global effort to promote the welfare of the girl child.

She said: “I give kudos to Glo for supporting this noble objective. Girls are the creators of society, the homemakers, the ones that make the world great, the ones that promote peace and stability in the world.  I am delighted the United Nations set aside Thursday, October 11, 2018, every year as the International Day of the Girl Child to help draw attention to the plight of girls. I am happy that through the support of organizations like Globacom we are able to join the rest of the world to mark this day”.

Globacom’s representatives, Justina Abdulateef (3rd left) and  Temitope Oke, and girls from different secondary schools who participated at the 2018 International Day of the Girl Child sponsored by Globacom in Lagos.

Also speaking at the ceremony, Globacom’s representative and Manager, Public Sector, Lagos, Justina Abdulateef, encouraged participants to rise above stereotypes and discriminations that had deterred many girls from pursuing their dreams.

“You must, therefore, never let anyone limit your possibilities. If you set your mind to it, there is nothing you cannot achieve as a girl”, Abdulateef stated.

The Convener of the forum and Publisher of e-Business Life magazine, Ufuoma Emuophedaro, in her remarks said the objectives of the International Girl Child Day were “to spread awareness about issues faced by girls and to promote girls’ empowerment and fulfillment of their human rights while also highlighting the challenges that girls all over the world face”.
————————————————————————————————————————————–
Sponsored Content