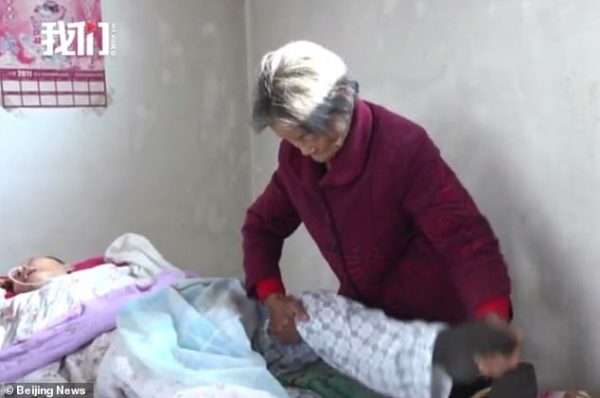 A mother’s love is such a powerful thing. The devotion.

Wang Shubao has been in coma since 2006 following a car crash in China. After 12 years of being cared for by his mother, he’s woken up.

Wei Mingying, has been by his side all through the 12 years, waking at 5 to wash him, feed him and tend to him.

According to Daily Mail, Wang’s father had passed since he was child, leaving him to his mother’s care.

Day and night, Wei has been at her son’s bedside caring for him since the accident which happened when he was 36, nursing him out of the coma.

“There was a time when I wouldn’t eat for an entire month because we were so poor,” Wei shared, revealing she’s now $13,000 in debt.

But she’s incredibly happy her’s son’s awoken, catching him smiling at her one day, revealing he had regained consciousness.

Right now Wei is still unable to move, but his mother’s optimistic. She said:

I am just overjoyed. I hope he will make a full recovery. I will never give up on him.