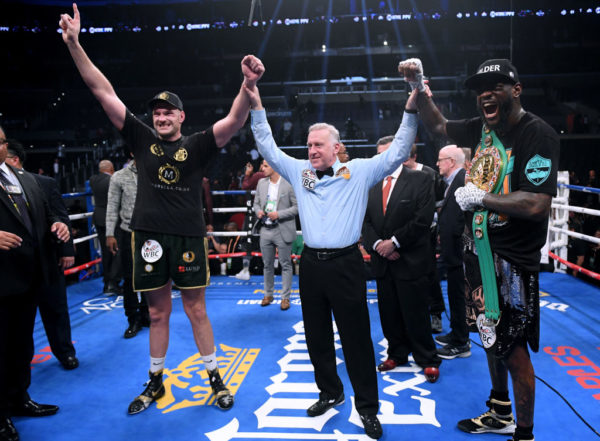 Tyson Fury and Deontay Wilder pose for a photo with referee Jack Reiss after fighting to a draw during the WBC Heavyweight Champioinship at Staples Center on December 1, 2018 in Los Angeles, California. (Photo by Harry How/Getty Images)

Deontay Wilder and Tyson Fury fought it out in a 12-round match only for it all to end as a draw.

In what most analysts have described as a questionable decision, two judges scored the match for each fighter, while a third had it as a draw.

Most analysts had Fury for the win, despite going down twice: in the 9th and 12th rounds. The boxer got back up both times, wearing Wilder out.

Although Wilder retains his WBC heavyweight title with the result, promoter Frank Warren has said he’ll demand “for a rematch which we want in the UK.”

Report laments Spread of Fake News on WhatsApp in Nigeria