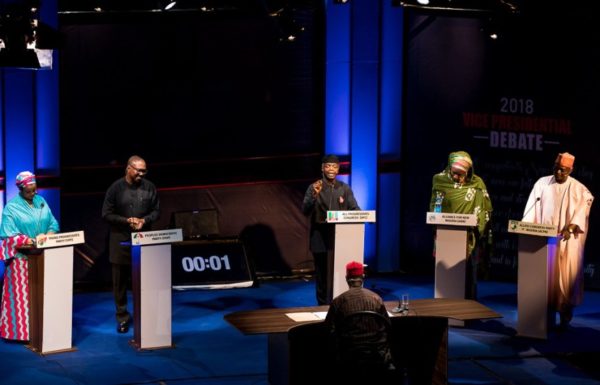 Yemi Osinbajo of the All Progressives Congress (APC), Peter Obi of the People’s Democratic Party (PDP), Ganiyu Galadima of the Allied Congress Party of Nigeria (ACPN), Khadijah Abdullahi-Iya of the Alliance for New Nigeria (ANN), and Umma Abdullahi-Getso of the Young Progressives Party (YPP), were the candidates who spoke at the debate.

The economy, constitution, corruption, were among the topics discussed, the candidates sharing the change they want to implement.

Punch reports that Osinbajo, asked why Nigeria’s aggregate investment has not risen 16% in the past 10 years compared to South Africa, blamed the PDP. He said:

I think the common denominator between the two countries you mentioned is the strong infrastructure. Our nation in the past 16 years has suffered a major infrastructure deficit. So, we don’t have rails, roads. When we came into power in 2015, power was 4,000MW in 16 years.

So, you need strong infrastructure. No one can argue about it. The second thing is you cannot have a strong economy if you allow the type of grand corruption that has taken place in Nigeria in the last 16 years.

Obi, on his part, criticised the present administration’s strategy of fighting corruption. He said:

If you look at our stock market, we have lost over N2tn in one year. So, that is not a policy. You’re just fighting corruption, you are not creating jobs. You cannot shut down your shop and be chasing criminals.

Abdullahi-Iya said her party’s focus isn’t politics, but the Nigerian economy, which has taken a battering in recent times.

The party has plans to put the 13 million out-of-school kids back in school, she said.

There are also plans to empower 774 local government areas in the country, she said, to harness the resources available in their areas in a manner that their development would be sustained.

Getso discussed restructuring the constitution and the government. She said:

We will embark on a constitutional restructuring to transform the health, security and education sectors, while empowering the youths and creating employment.

The constitutional restructuring will enable us to distribute power down to the six geo-political zones, giving them the opportunity to own their resources.

In this way, there will be enough for development at all levels.

Galadima urged Nigerians to make informed decisions at the polls. He asked that they look to and properly consider the campaign manifestos of all the candidates before making a decision on who to vote into office.

The Presidential Debate is set to follow Friday’s, taking place on the 19th of January.